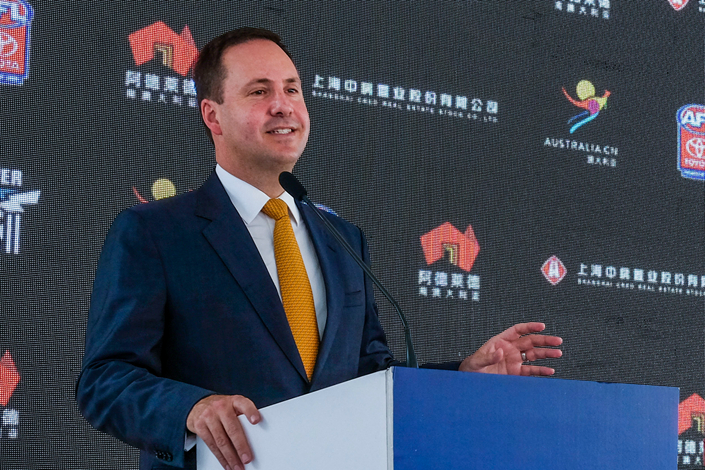 Ciobo’s trip was the first to the Chinese mainland by a cabinet-level Australian official in eight months, underscoring the bumpy relations following anti-China remarks made by some Australian politicians and Canberra's tightened regulations on foreign investment.

But during his visit, Ciobo noted the two countries’ close bilateral relations and agreed that the negative market reaction to Australia’s intention to curb Chinese investment was understandable.

“Australia and China enjoy a very strong relationship, especially in investment and trade, as it’s a very broad and deep relationship,” Ciobo told Caixin in an interview on Friday. “There are also very strong people-to-people links, and cultural links as well.”

“Australia is a very open economy. I think all countries understand that scrutiny should apply to some sensitive sectors, and pretty much every country in the world does,” Ciobo said. “So that’s just about assuring them when it comes to a critical piece of infrastructure, that we have in place controls around who owns that critical infrastructure.”

Ciobo said the port delay for Australian wine products caught his attention, and he has mobilized his team to address the situation. The issue should be settled over the next week or two, he said.

On the suspension of talks about linking the Northern Australia Development Plan with China’s One Belt One Road initiative, Ciobo said that Australia welcomes foreign investments into northern Australia, including in land, tourism, agriculture products, and resources. But so far, there “haven’t been any conversations to do something formally.”

“Australia has one of the largest savings pools globally, with around $2.5 trillion worth of national savings,” he said. “It is proof of the fact that we have a very mature and involved financial services system. And I certainly believe that there’s much that we can share with China around financial services, intellectual property and expertise.”

But by Tuesday, evidence remained of the long way the two countries have to go to mend relations. At a press conference in Beijing, Chinese Foreign Minister Wang Yi placed responsibility for the complications squarely on Australia.

“If Australia is genuinely hopeful for getting the bilateral relationship back on the right track, it should abandon its traditional thinking and take off its colored glasses to take a proactive approach towards China’s development,” Wang said.