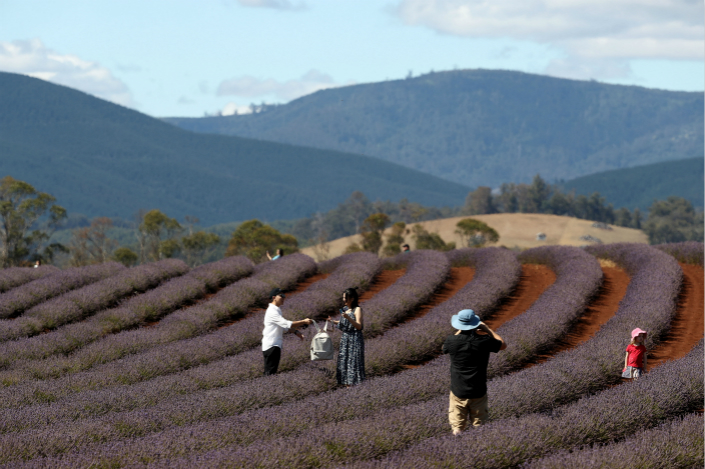 Tourists make their way through the lavender rows at Bridestowe Lavender Estate, which is domestically owned and not for sale, on Jan. 10 in Launceston, Australia. In September, the Australian Tax Office's Agricultural Land Register said the amount of Australian farmland owned by Chinese interests had grown tenfold over the preceding year. Photo: VCG

The Australian government has moved to limit foreign investment, prompting calls for fairness and transparency from China.

Australians will be given priority over foreigners in sales of farmland, and foreign buyers will face ownership restrictions when purchasing electricity distribution and transmission assets, Australia’s Treasurer Scott Morrison said Wednesday.

The announcement comes amid growing concern in Australia about China’s influence on the country’s economy. Chinese investors have invested more in Australia than any other nation for three years in a row, according to 2017 Australian government figures.

In September, the Australian Tax Office's Agricultural Land Register said the amount of Australian farmland owned by Chinese interests had grown tenfold over the preceding year.

Foreign bidders for electricity assets, which Morrison described as an area where “the stakes are higher,” will be assessed by Australia’s Foreign Investment Review Board and face restrictions or conditions on their purchases, the treasurer said.

Meanwhile, all non-government foreign investors hoping to make a purchase that would put their combined agricultural land holdings in Australia at more than AU$15 million ($12 million), as well as foreign government investors with any size of land holdings, must now receive approval from Australia’s government before going ahead with a deal.

Additionally, agricultural land parcels of any value must be advertised in a way that is accessible to Australian bidders for at least 30 days before a sale, under the new measures.

The new rules are aimed at facilitating foreign investment “while making sure Australia’s national interest is protected,” according to the statement.

“Concerns around the ability of Australians to participate in the sale process of agricultural land acquisitions have been a factor in my previous foreign investment decisions, including approval of the sale of S. Kidman & Co Limited,” Morrison said.

In April 2016, the treasurer blocked China-based Hunan Dakang Pasture Farming Co. Ltd.’s planned purchase of S. Kidman & Co., a beef company with over a hundred years of history and more than 100,000 square kilometers (39,000 square miles) of pastoral land. Had the deal succeeded, Hunan Dakang Pasture Farming would have become the owner of more than 1% of Australia’s land area.

Xie Dawei, director of Australia investment at Beijing-based Zhongyi Investment Co. Ltd., told Caixin that the vast majority of agricultural land sales in Australia are sold openly, so the new rules will not have too much of an impact on his company’s operations.

Australia’s move to tighten restrictions follows similar actions by other countries experiencing a growing tide of Chinese investment. The U.S. Congress proposed a bill in December that would extend government scrutiny of technology joint ventures with foreign companies, as well as add connections with China to a list of risk factors.

The caption of this article has been amended to make clear that Bridestowe Lavender Estate is 100% Australian-owned and not for sale.