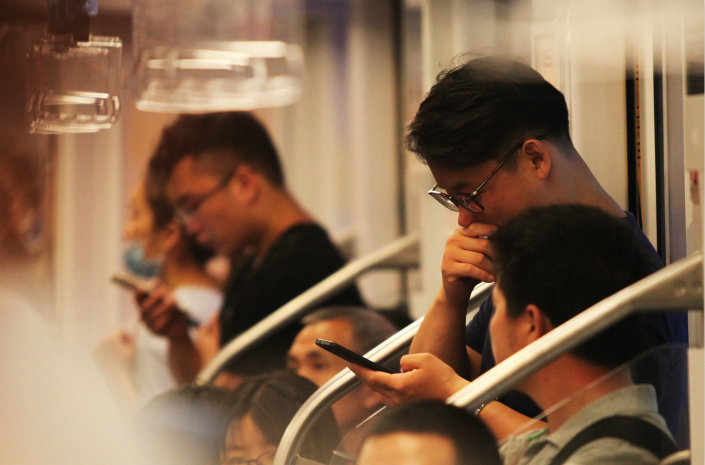 Passengers use their smartphones on a subway train in Nanjing, Jiangsu province. Photo: IC

China Mobile Ltd., the world’s biggest wireless carrier by subscribers, posted its first-ever decline in subscribers for its most advanced 4G service in April, as the Chinese market shows growing signs of maturation.

China Mobile and its two smaller rivals, China Unicom and China Telecom, have been grappling with slowing growth in recent years, as their country catches up with the West in terms of mobile penetration. As that happens, the trio has had to increasingly compete by luring away existing customers from one another.

China Mobile, which controls about 60% of the world’s largest mobile market, had slightly less than 900 million wireless subscribers at the end of last month, including 669 million subscribers for its newest 4G network, according to the company’s website. While the total subscriber figure was up slightly from March, the 4G figure posted its first-ever decline from about 672 million the previous month, the data showed.

Industrywide data from China’s telecom regulator (link in Chinese), the Ministry of Industry and Information Technology, showed that China’s overall 4G subscribers grew by about 19 million in April to 1.08 billion, as subscriber gains from Unicom and China Telecom more than offset the decline at China Mobile.

“China Mobile’s ongoing 4G share loss was expected, but negative subscriber growth was still a surprise,” Jefferies analyst Edison Lee said in a research note. “According to China Mobile, part of the decline was due to promotional offers a few months back. …. The other ongoing drivers would likely be more competitive pricing of China Telecom and Unicom, as well as already high 4G penetration.”

China Mobile’s shares are down about 7% since the start of the year. The company’s profit grew 4.1% in the first quarter, as surging revenue from data services offset declines in use of traditional voice services. The company and its peers are expected to get their next major boost when China rolls out commercial fifth-generation (5G) mobile services, which is expected around 2020.