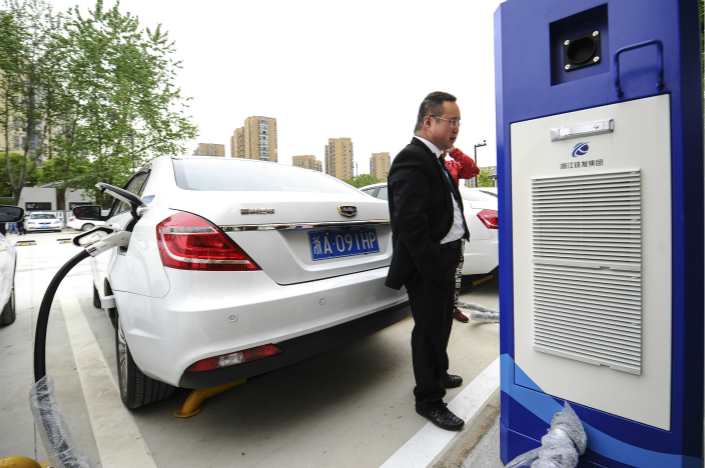 A driver recharges his new-energy vehicle at the Hangzhou East railway station in Hangzhou, Zhejiang province, on April 16. Photo: VCG

China is scrapping tax rebates for over 1,880 models of new-energy vehicles as part of a broader plan to phase out government incentives for the sector.

A total of 1,882 models from dozens of foreign and domestic players, ranging from bus-maker Nanjing Golden Dragon Bus Co. to electric-car leader BYD Co. Ltd., will no longer qualify for the tax reduction, according to a list (link in Chinese) posted on the website of the Ministry of Industry and Information Technology.

A recent inspection by the ministry, along with the State Administration of Taxation, has found these car models either haven’t gone into production or have yet to be imported into China. This disqualifies them from being able to be free of taxes, the ministry said in the statement Tuesday.

The move is the latest of Beijing’s broader efforts to gradually phase out years-long state incentives in the new-energy car sector, in which central and local governments have both provided massive subsidies. The sweeteners have made China the world’s largest electric-car market since 2015.

But the subsidy program has led to widespread fraud. An industrywide investigation launched by regulators in late 2016 found that automakers employed a range of tricks to qualify for state support, including falsifying sales of their vehicles.

Given the downsides, China plans to completely phase out the subsidy program by 2020. The central government will slash financial assistance by 20% starting next year, instead of 2019 as planned.

However, the government is offering a buffer period for the transition.

A 10% tax waiver for purchasing new-energy vehicles — a program started in 2014 and had been expected to be terminated at the end of last year —will now be extended until 2020.

The central government has opted for a more market-oriented quota system that will require all makers to ensure a certain percentage of sales come from low- or zero-emission vehicles, starting from 2019.

The quota will be gradually increased, forcing automakers to buy “credits” from other producers for every conventional car they make.