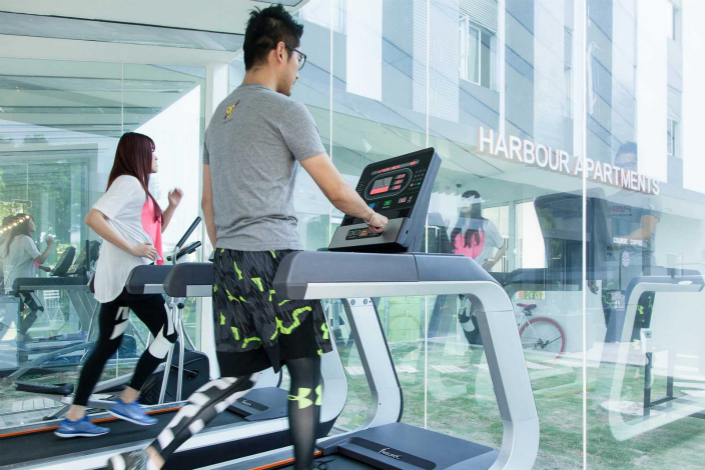 People work out in the gym at a Harbour Apartments complex in Shanghai. Photo: harbourhome.com.cn

A Shanghai-based co-living space operator has set itself an ambitious goal: starting from next year, it aims to gradually expand into 15 overseas markets such as New York, Los Angeles, Paris, London and Berlin.

Harbour Apartments is eyeing demand from Chinese students studying in major international cities, which also include those in or near Asia like Sydney, Tokyo and Singapore, said a source familiar with the matter.

Set up in 2015, Harbour is backed by Hong Kong’s Gaw Capital Partners and the Shanghai-based Trustbridge Partners, which jointly invested 400 million yuan ($62.6 million) in the company in September.

Its ambition is to operate 1 million rooms within five years at the earliest, both locally and domestically, the source added.

Harbour currently has a presence in six Chinese mainland cities, including Beijing, Shanghai, Hangzhou and Nanjing. It’s set to debut its first project in Hong Kong this year.

The co-living operator this week launched a 10 billion yuan fund with Far East Horizon Ltd., a financial leasing firm backed by the state-owned Sinochem Group. It said the fund will buy land plots that the Chinese government has designated for rental development once they hit the market.

It also said Gaw Capital has injected another $1 billion into the company to help it acquire existing properties and convert them into co-living spaces, otherwise known as long-term leasing apartments in China.

“Co-living is gaining traction in Asia, particularly in markets like Hong Kong and greater China, where housing affordability is a concern,” real estate consultancy JLL said in a report. “While flat-sharing among students and young professionals is popular in many countries, what differentiates co-living spaces is they are professionally managed rather than informally arranged.”

Major players in this space in China include Vanke Port Apartment, YOU+ International Youth Community, Coming Space, Mofang and ZiRoom, it said.

A new entrant joining the rental fray is developer China Vanke Co. Ltd. A recent project in suburban Beijing has recently raised eyebrows, due to sky-high rents of as much as 40,000 yuan per month.