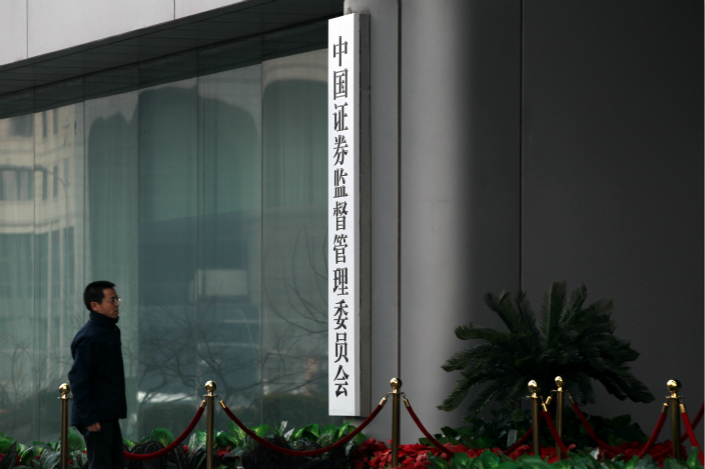 The headquarters of the China Securities Regulatory Commission is seen in Beijing. Photo: VCG

China’s top securities regulator may punish six mutual funds, five of which are scheduled to attend hearings on potential administrative penalties this week, for alleged insider trading by their managers, Caixin has learned from sources close to the matter.

The potential punishment marks the first time that the securities watchdog has targeted fund companies in such cases, sparking a debate about whether fund firms should be punished for the actions of their managers.

In the case, the China Securities Regulatory Commission (CSRC) found that the then-board secretary of Shenzhen-listed construction software supplier Glodon Co. Ltd. leaked insider information to researchers at several securities firms in 2012, unnamed sources told Caixin. Those researches went on to tip off the fund managers at five mutual fund firms, who then allegedly used it to trade Glodon shares.

The CSRC had almost completed its investigation of the case in 2013, but it was held up because departments within the commission held different opinions about whether to punish only the fund managers or to punish both the managers and their firms, people close to the regulator told Caixin.

The case recently restarted after a CSRC vice chairman endorsed punishing the firms as a way to scare others away from insider trading, the people said.

The CSRC has made a preliminary decision to punish Goldstate Capital by confiscating its illegal gains of 2 million yuan ($313,000) and fining it the same amount, along with slapping its managers with hundreds of thousands of yuan in fines, sources close to the fund firm told Caixin.

Each of the other fund firms faces potential confiscation of illegal gains and a fine equivalent to three times those gains. They will attend hearings this week, and all have prepared to argue against the punishments, sources close to the firms said.

Industry insiders hold different views about the regulatory action. Some say the effect will be damaging if the fund firms end up labeled as rule-breakers because their institutional clients such as banks and insurance companies could withdraw their money. However, others don’t think the punishments will have a great impact, especially on the more-established firms.

Newly filed cases of insider trading increased by 54% year-on-year to 101 in 2017, and the average amount of money involved in each case was above 30 million yuan, according to CSRC data (link in Chinese).