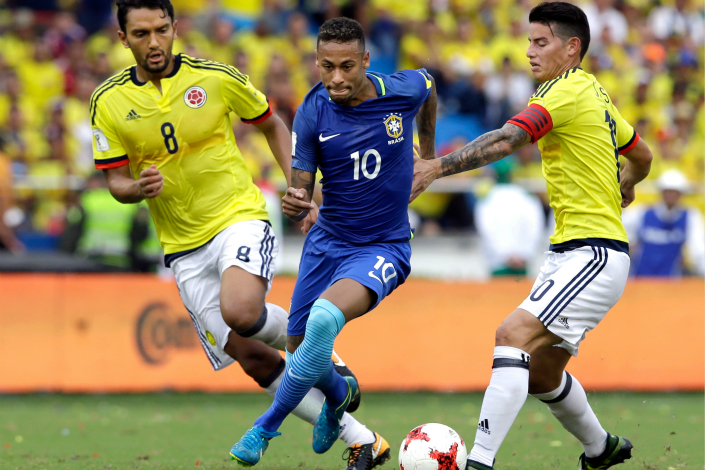 The soccer teams of Brazil and Ecuador face off in a 2018 World Cup qualifier match on Aug. 31 in Brazil. Photo: IC

* Companies with the rights are betting that the World Cup, held every four years, will attract a huge Chinese audience

Youku is the second online platform granted the right to livestream the one-month tournament, which kicks off in Russia on June 14. Last week, Migu Video announced a similar deal.

Both sites inked agreements with state-run China Central Television (CCTV), the sole broadcaster of all FIFA games in China between 2018 and 2022. The financial details of the deals weren’t disclosed.

They have bet that the tournament, held every four years, will bring in huge traffic. Unlike Migu, which is backed by the state-owned China Mobile, profit-sensitive Youku, a once-dominant video site that delisted from New York in 2016 after years of losses and tough competition from emerging players, has been seeking to increase its income from its cash-burning video business.

The World Cup is very popular in China, even though the country’s national team hasn’t qualified for the tournament since 2002. Youku expects over 1 billion Chinese to tune in this year, as the Russian venue is only five hours behind China, meaning many games will be held at the “golden time” for Chinese fans, Youku said in a statement.

Although people will be able to watch the World Cup for free, Youku will be able to generate huge advertising revenues. In 2014, CCTV didn’t allow any third-party online platform to livestream the tournament as it reportedly regretted missing out on some advertising revenue during the 2010 World Cup, when it agreed that several sites — including Youku — could also broadcast the matches.

Youku was one of China’s earliest video sites when it was launched in 2006, years before some of its current rivals such as iQiyi and Tencent Video, which were founded in 2010 and 2011 respectively.

In 2010 it became the first Chinese video company to list in New York and acquired a major rival, Tudou, in 2012. Since then, Youku’s net losses widened from $95.9 million in 2013 to $207 million in the first three quarters of 2015, before Alibaba agreed to privatize the company for more than $3.6 billion.

The video industry has transformed since Youku’s golden age, when it thrived by hosting user-generated content. Its rivals, iQiyi and Tencent Video, have been spending huge sums to snap up professionally made content. For example, in 2015 iQiyi bought the rights to stream more than 800 Paramount movies. The same year, Tencent spent $500 million to secure five-year digital rights to show National Basketball Association games in China.

Youku President Yang Weidong said in October that competition will only grow fiercer in the future. Tencent Video had 62 million paid subscribers by the end of February, and iQiyi had 60 million. The last time that Youku revealed the figure was in November 2016, when it was 30 million.