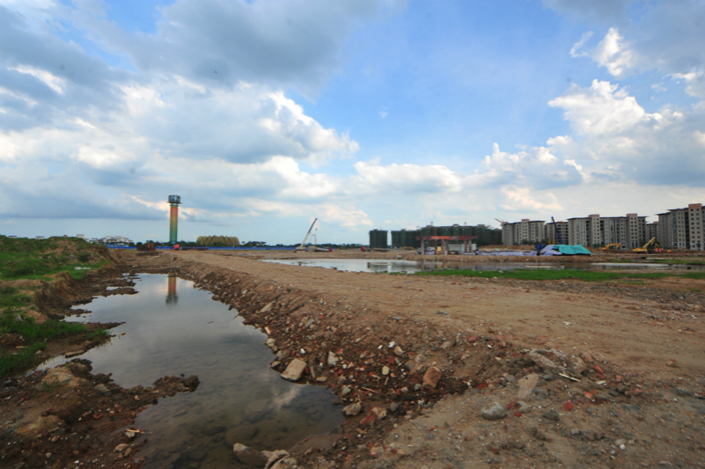 Kaiwei Ecosystem City was a proposed 115-acre racecourse in Hainan province, but it remains unfinished, more than a quarter-century after the project was launched. Photo: Wang Di

Kaiwei Ecosystem City would have been China’s grandest horse racing complex, featuring luxury villas, a 115-acre racecourse, and stables that house expensive thoroughbreds, perched on the northern coast of the country’s only tropical province.

But the massive development near Hainan province’s Haikou city was never completed. More than 25 years after the project was first launched, the promised racecourse is still just a patch of grass. Farmers raised pigs in the project’s abandoned stables before moving out of the complex last year.

Betting on horses was a popular urban pastime in pre-revolution China, but the practice was banned in 1949. Gambling is illegal throughout the country with the exception of casino gaming in the Macau special administrative region, and official welfare and sports lotteries on the mainland. A number of trial horse-race betting programs in Chinese cities in the 1980s and 1990s encouraged investors to pour money into the industry, but a subsequent government clampdown brought many investors’ plans to a halt by the early 2000s.

Then in April, after years of mixed signals from the central government, authorities in Beijing announced their plan to nurture horse racing and encourage sports lotteries in Hainan, without explicitly saying they will legalize horse-race gambling.

The announcement comes as part of a larger strategy to turn Hainan into an economic powerhouse. Authorities have also rolled out plans for a free trade port with visa-free entry to the island province for dozens of nationalities.

Hainan’s planned racecourses will not be the first to host races in modern China — but they may become the first successful ones. To become profitable, long-term ventures, they must escape the problems that have plagued China’s other horse-racing hubs so far.

In 1993, the Guangzhou government completed work on its own racecourse, despite a central government call in 1992 for an end to all gambling-related activities, including horse racing.

In January 1993, the venue held its inaugural race, and 50,000 spectators thronged the grandstand built for only 40,000. The total amount bet on the first race was 600,000 yuan, and grew to 1 million yuan for the next race, which also attracted a massive crowd.

But the Guangzhou racecourse’s success also brought about its downfall. Word of the city’s races spread northwards and soon reached authorities in Beijing, who sent investigators down to see what all the fuss was about.

Races were briefly suspended but resumed again in July 1993 after receiving the green light from reluctant inspectors — but this time, the betting was rebranded as an “intelligence quiz.” After a second visit from central government investigators in 1996, the “intelligence quiz” was renamed a “voucher prize exchange.” Spectators who had placed winning bets were allowed to redeem noncash prizes, after which they had the option to sell the prizes back to the club for cash.

“Actually, few people exchanged their vouchers for the noncash goods,” Chen Guangxin, a council member of the China Horse Industry Association who worked in Guangzhou in the 1990s, told Caixin. “They all just took the money directly.”

Then, in December 1999, the Guangzhou races were abruptly shut down by the city government. A 2002 central government announcement reiterated its previous ban on horse racing-related betting, and developers in other cities, including Shanghai, were forced to put racecourse projects on hold.

After decades of stops and starts, investors are excited about the prospect that commercial horse racing could finally gain momentum in Hainan.

Hong Kong businessman Jacky Wu Yuet-Ko, the founder of the Orient Lucky City racecourse in Wuhan, the capital of Central China’s Hubei province, told Caixin that he received multiple calls from businesspeople asking for tours of his racecourse in the days following the central government’s April announcement.

But Wu himself isn’t ready to bet on Hainan’s nascent horse-racing industry.

Many of the people who called Wu after the April announcement to inquire about horse racing were unfamiliar with the industry. “Some had never even seen a horse before,” Wu said. “This isn’t as easy as real estate. If you don’t understand (horse racing), you’d better not do it,” he warned.

While Hainan has dreamed of becoming a racing destination for decades, its equestrian sports infrastructure is still virtually nonexistent. Additionally, horse racing is an expensive sport — especially in a country where there’s no certainty that operators will be able to rely on betting, the main source of revenue for racecourses elsewhere in the world.

Orient Lucky City has been hosting the annual Wuhan Horse Racing Festival since 2003. The festival draws thousands of local families each year. Spectators can place a bet on the winning horse — but the prize is a bottle of Pepsi cola.

Wuhan has been trialing limited gambling on horse races, for noncash prizes, since 2008. But even so, Orient Lucky City has not been able to turn a profit since it opened in 1999 because the revenue it collects providing racing services fails to exceed the cost of staging races, without significant, legalized betting, Wu told Caixin.

“I have no choice but to use the profits from my other businesses to subsidize Oriental Lucky City,” Wu said.