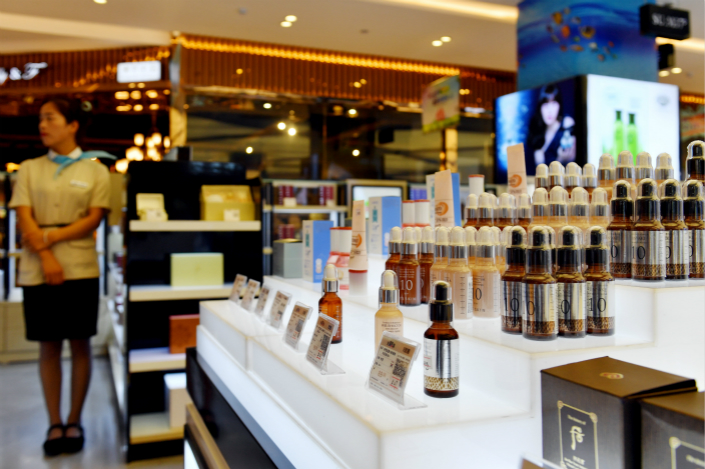 Imported cosmetics are displayed at a duty-free shop at Zhengzhou Xinzheng International Airport in Henan province on June 28. Photo: VCG

* Survey polled about 1,400 three-person households with a monthly income of over 20,000 yuan

* Most households see price, quality and safety issues as the most important factors when they are deciding which imported items to buy

(Beijing) — Chinese consumers plan to spend more money on imported cosmetics, baby products, food and watches in the coming months, a recent survey showed, as China prepares to expand imports to reduce the trade surplus with the U.S.

The survey found most households see price, quality and safety issues as the most important factors when they are deciding which imported items to buy.

The survey comes at a time of heightened trade tensions between China and the U.S., with recent rounds of trade talks held in Beijing and Washington failing to end the threat of a trade war.

The White House said on Tuesday it will finalize a list of $50 billion in Chinese exports to the U.S. that will be subject to a 25% tariff before June 15 unless China addresses U.S. concerns about intellectual property rights protection. The White House also said it will announce measures to step up controls on Chinese investment in the U.S., and U.S. firms’ technology transfers to China, by June 30.

The Commerce Ministry said Tuesday evening that it was “surprised” by the U.S. statement but reiterated that it will protect the country’s interests “at all costs.”

China will increase purchases of U.S. goods and services “to meet the growing consumption needs of the Chinese people and the need for high-quality economic development,” according to a joint Sino-U.S. statement issued on May 19 regarding trade talks.

Baby products, cosmetics and watches are some of the goods in which Chinese consumers are most interested, the survey found.

A total of 36.9% of respondents said that they will buy more imported baby products within the next six months, while 44% and 19.1% said their spending will be the same or reduced respectively.

The poll showed that 37.1% of consumers said they plan to spend more money on foreign-made watches and eyeglasses over the coming months, and 46.9% said they will keep their spending level unchanged.