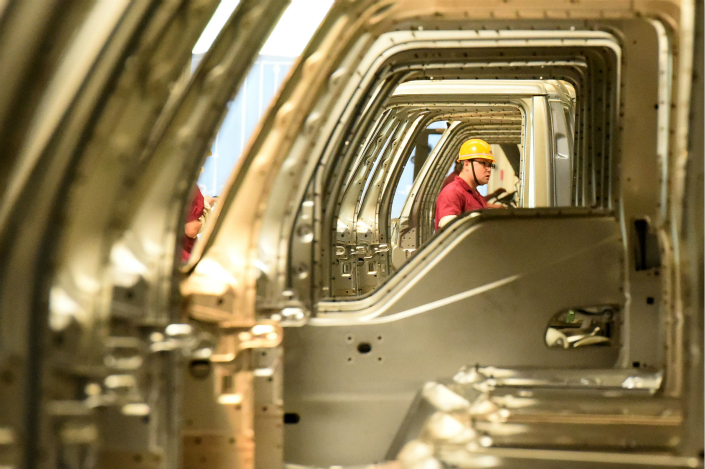 Manufacturing activity in China hit an eight-month high in May as demand in both domestic and foreign markets picked up from the previous month.

China’s official manufacturing purchasing managers’ index (PMI) rose to 51.9 in May, up from April’s 51.4, which marked the highest reading since September, according to data released by the National Bureau of Statistics (NBS) on Thursday.

A number above 50 indicates an expansion in manufacturing activity, while anything below suggests a contraction.

The official nonmanufacturing PMI, which gauges activity in the service and construction sectors, rose for the third month in a row to 54.9 in May, boosted by an uptick in the service sector that helped offset weaker construction activity, which was dragged down by inclement weather such as flooding and rainstorms in some regions, NBS said.

The breakdown of the headline PMI index showed the output subindex rose to 54.1, the highest point since November, while new orders rose to an eight-month high of 53.8 in May.

New export orders and imports all strengthened from the previous month, pointing to rising demand in both foreign and domestic markets.

“Today’s strong set of official PMIs tell a reassuring story about current growth momentum,” London-based research firm Capital Economics said in a note, adding that the Chinese economic recovery starting in April may have extended into May.

Despite the overall upbeat outlook, the PMI survey — which polls 3,000 large and midsize firms in 31 major manufacturing sectors — showed that 40.1% of firms reported financial pressure mounting in May, up for the third consecutive month, and more than 40% said labor and material costs were elevated, the NBS said.

The economy achieved robust growth in 2017 due to a cyclical recovery in global trade, which is likely to taper in 2018, the International Monetary Fund said in a statement issued in Beijing on Wednesday after a two-week seminar on Chinese economic policies.

The IMF said it was impressed by China’s resolve in defusing the financial risks that have accumulated inside its financial system and that it expects China’s growth rate will be 6.6% in 2018, slowing gradually to 5.5% by 2023.

Economists from Capital Economics cast doubt on whether this robust expansion will be sustained for long, adding that a better diagnosis of the economy will be available when the May reading of the Caixin manufacturing PMI is published.

The independent Caixin manufacturing PMI will be published on Friday, and the Caixin China General Services Business Activity Index will be released on Tuesday.