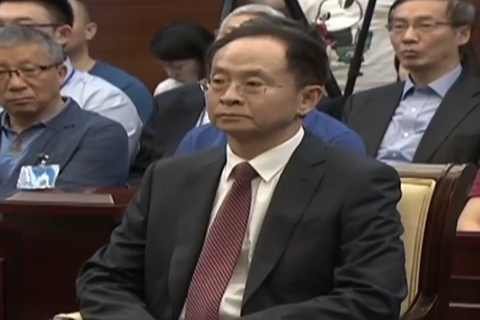 A Chinese supermarket tycoon jailed for bribery and fraud was exonerated Thursday when the Supreme People’s Court overturned his decade-old conviction.

Zhang Wenzhong, 55, a Stanford-educated computer scientist, founder and former chairman of one of China’s biggest retail chains, Wumart Stores Inc., listened calmly while the judge read the ruling for 45 minutes at the Supreme Court Thursday. Zhang was sentenced to 18 years in prison in 2008.

The ruling was a rare reversal in the midst of a series of investigations and convictions involving high-profile executives in the government’s anti-corruption crackdown.

The top court said the ruling shows the authorities’ determination to protect the property rights of private businesses and create a better environment for entrepreneurs to work to their full potential.

Chinese authorities have pledged measures to better protect private business and adopt a more tolerant attitude toward older private businesses that built wealth in ways that might have been illegal at the time. The top court said in late 2016 that it would re-examine some controversial cases from the past involving private businesses.

The conviction of Zhang, once praised as a representative of “Chinese scholar entrepreneurs,” was highly controversial because the case involved whether private companies were eligible for government subsidies related to technology development.

Zhang opened Beijing’s first supermarket Wumart in 1994, which later expanded into one of China’s largest supermarket chain and listed in Hong Kong in 2003. Zhang was listed as China’s 125th richest businessman by Forbes in 2004.

In 2006, Zhang was placed under investigation by authorities for a corruption case involving a former Beijing deputy mayor. He stepped down from Wumart later that year.

In 2008, the municipal Intermediate People’s Court in Hengshui, a small city in Hebei province, handed down the original sentences for Zhang and another executive of the company for fraud, embezzlement and bribery.

According to a court verdict, Zhang was accused of forging documents to swindle 31.9 million yuan ($5 million) of government subsidies for a technology development project. Prosecutors said only state-owned companies were eligible and Zhang colluded with a subsidiary of a government enterprise to obtain the subsidies.

According to the sentences, Zhang was also accused of paying 5.3 million yuan of bribes to someone who helped Wumart in an acquisition deal and of misappropriating 40 million yuan of company funds to trade shares for personal profit.

In addition to prison time, Zhang was also fined 1 million yuan, and his company was fined 5.3 million yuan.

After an appeal in Hebei Higher People's Court, Zhang’s sentence was shortened to 12 years in 2009 and his fine was reduced to 500,000 yuan. He was released in 2013 after his prison time was further reduced.

In 2016, Zhang petitioned the Supreme People's Court, which agreed to a retrial late last year.

After an unusual retrial that started February, the top court ruled that while Zhang violated rules in applying for the subsidies, he and another convicted executive had no “subjective intention” to commit fraud and his company was eligible to receive them because the rules changed by the time Wumart applied.

The top court on Thursday said private businesses in earlier years had sometimes breached regulations in ways that did not necessarily constitute crimes.

The alleged bribery payment was remuneration for services, rather than bribery, it ruled. The court said the facts related to the allegations that Zhang misappropriated funds were unclear and “lacked sufficient evidence.”

The court said the convictions by the lower court were a “misapplication of the law and should be corrected.”

The court ordered the return of the fine payments to Zhang and his company. Zhang also has the right to claim compensation from the government.