By Ma Danmeng and Li Rongde 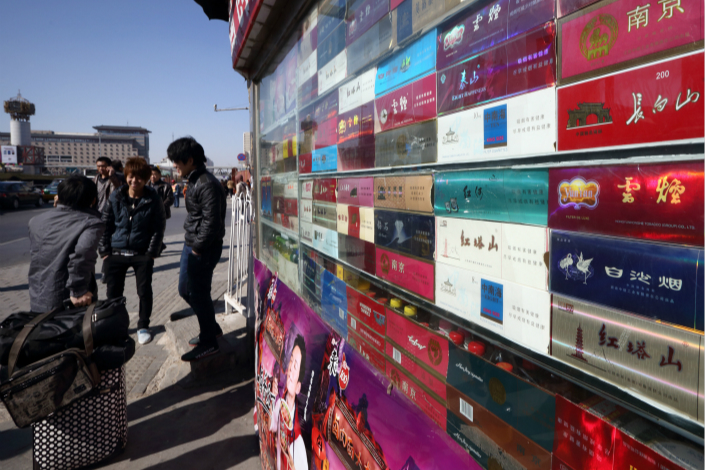 Cartons of cigarettes are displayed at a kiosk outside Beijing West Railway Station in 2013. Photo: VCG

Anti-smoking advocates are urging China to overhaul its tobacco taxes to stem a recent increase in sales after years of declines.

China hasn’t raised its rates since 2015, when the wholesale cigarette tax was increased from 5 to 11%, causing sales to drop for two years in a row.

But purchases began to rebound last year, according to China’s State Tobacco Monopoly Bureau. That has prompted concerns that the effect of the 2015 increase might be wearing off as incomes rise in China.

“A hike in tobacco taxes remains the best solution to rein in smoking,” said Teh-wei Hu, professor emeritus with the School of Public Health at the University of California, Berkeley.

China doesn’t directly tax consumers for cigarette purchases. Rather, it taxes manufacturers and distributors, who pass down the cost through higher sales prices.

These taxes depend both on the value of the cigarettes (for instance, the cost of a carton) as well the amount (the number of cigarettes). Hu said that increasing the former — the value-based tax — would just lead to younger and poorer smokers simply switching to cheaper brands, some of which go for as little as 50 U.S. cents a pack.

Nearly one out of five Chinese teens has tried cigarettes, and half of the country’s 300 million chronic smokers started before the age of 20, according to a World Health Organization (WHO) report.

“Teen smokers are among the most price-sensitive groups of consumers and price increases could discourage them from starting their first puff or could reduce their use,” said professor Mao Zhengzhong from Sichuan University’s West China School of Public Health.

A tax increase could also help address poverty, because smoking is more prevalent among the poor, he said.

China’s current 56% cigarette tax is lower than the 70% minimum recommended by the WHO in 2014, according to professor Zheng Rong at China’s University of International Business and Economics.

But professor Hu said an overhaul of the country’s tobacco tax could meet with resistance from growers, manufacturers and distributors who often argue that it will cost jobs and slow economic growth.

Smart Chart: Up in Smoke, Without a Warning