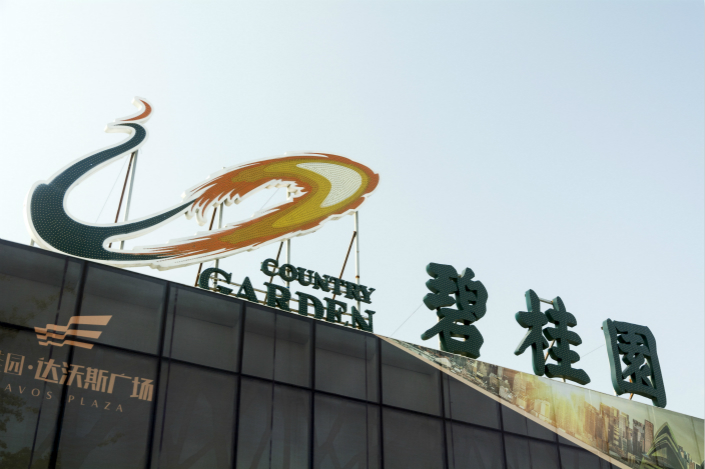 The suspensions have added to concerns over stricter regulatory requirements and tighter credit conditions for the debt-ridden property industry amid China’s ongoing deleveraging campaign.

A mainland subsidiary of Hong Kong-listed Zhenro Properties Group Ltd. suspended a bond issuance of 4 billion yuan on June 1, according to the Shenzhen Stock Exchange (link in Chinese).

Country Garden suspended the bond issuance to adjust its fundraising and investment plan, a representative from the company told Caixin, adding that it will continue the bond issuance upon further confirmation of relevant details.

The suspensions came days after Beijing Orient Landscape & Environment Co. Ltd., a well-established listed company involved in public-private partnerships, managed to raise only 5% of its target of 1 billion yuan through a bond issuance.

Property developers are afraid of ending up in the same situation, as it would arouse suspicion about their financial situation and credibility, the head of the risk control department at a listed securities firm told Caixin.

At the end of March, the average debt-to-asset ratio of the real estate industry, which includes 138 A-share listed companies, reached a record high of 78.7%, according to data provider Hithink RoyalFlush Information Network Co. Ltd.

The central government has repeatedly emphasized that the real estate industry should bring down its leverage ratio. Even experienced investors have now become quite cautious about investing in bonds issued by property developers, especially since a recent surge in bond defaults, he said.

In the first four months of this year, 15 companies failed to repay their bonds, compared with 12 in the same period last year, according to a report from China Central Depository & Clearing Co. Ltd. The amount of money involved jumped 33.6% to 12.9 billion yuan.

Investor sentiment has affected the stock market. The market capitalization of the real estate sector in the A-share market has fallen 11.9% since the start of the year, while the benchmark Shanghai Composite Index has fallen only 6.5%, according to Hithink RoyalFlush.

The tightening credit conditions will have the greatest impact on small and midsize developers, especially when bond maturity reaches its peak in the second half of the year, the fund manager said.

Thirty-four developers listed in the A-share market will see 80.9 billion yuan in onshore bonds mature in 2018, according to Hithink RoyalFlush. More than two-thirds of the bond amount, or 55.4 billion yuan, will mature in the second half of the year.