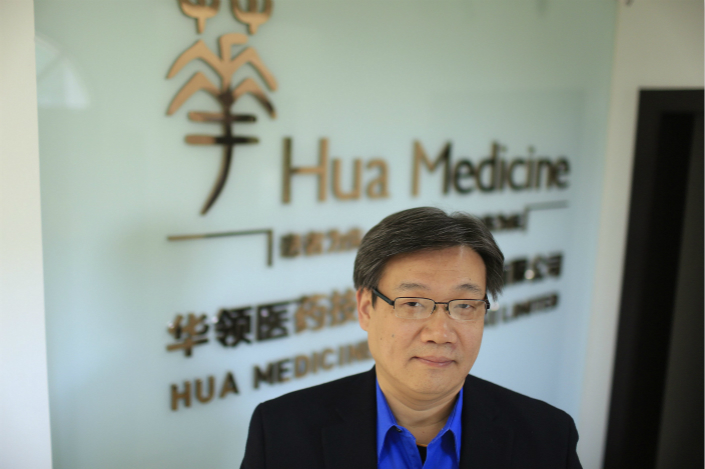 Li Chen, co-founder and CEO of Hua Medicine, poses for a photograph in front of a company logo at his office in Shanghai in February 2015. Photo: VCG

Clinical-stage diabetes drug developer Hua Medicine has filed for an initial public offering (IPO) in Hong Kong, the second pharmaceutical firm to do so since the bourse lowered the listing threshold for money-losing biotech firms.

The Shanghai-based company lost 322 million yuan ($50.4 million) in the first quarter of 2018 and lost 280 million yuan in all of 2017, according to its application on Wednesday.

It has chosen Goldman Sachs (Asia) LLC and CLSA Capital Markets Ltd. as joint sponsors of the IPO.

Hua, founded by Li Chen, a former senior executive of Swiss drugmaker Roche AG, has exclusive worldwide rights to Dorzagliatin, used to treat diabetes, under a 2011 deal with Roche.

The company is conducting third-phase clinical trials of Dorzagliatin in China, after which Hua Medicine can apply to put it on the market. It said in the application to the Hong Kong Stock Exchange that it expects to announce the results of the trial in the second half of 2019 and plans to move to the next step by 2020. It also wishes to eventually make the drug available in other markets.

The drug is used to treat Type 2 diabetes, a chronic condition that affects the way the body processes blood sugar. In 2017, there were 453 million diabetes cases globally, and 95% were Type 2, of which China had the largest group, or 120 million patients, according to consultancy Frost & Sullivan.

Hua Medicine is the second drugmaker to file for a Hong Kong IPO since the local bourse in April paved the listing path for qualified money-losing biotech companies. Ascletis Pharma Inc., a developer of anti-viral, cancer and fatty liver disease drugs, applied in May for an IPO in Hong Kong.

Hua Medicine’s pipeline also includes a drug for a Parkinson’s-related disease, which is expected to start phase-one clinical trials in the first half of next year.