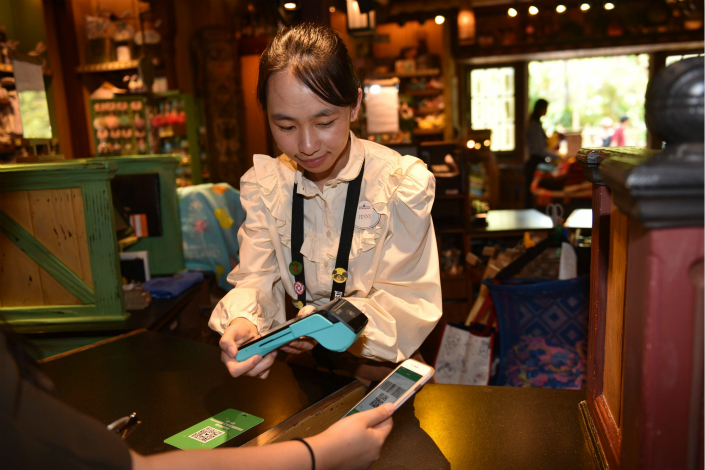 A cashier at a Hong Kong Disneyland gift shop scans a customer’s WeChat payment information on May 24. Photo: VCG

Tencent Holdings Ltd.’s mobile-payment system might be in the top two on the Chinese mainland, but that doesn’t mean its tactics for rapid expansion at home will work elsewhere, particularly in Hong Kong.

Since 2014, Tencent has allowed users on the Chinese mainland to send virtual “red envelopes” to each other via its ubiquitous WeChat app. Cash-stuffed red envelopes are the traditional way Chinese give money as a gift. Making them digital turned out to be a smash hit among WeChat users, giving the payment service an enormous initial boost. The tactic — along with getting its payment system accepted by popular online retailers like JD.com — has helped the social media giant win around 40% of the mainland’s $5.9 trillion mobile payment market.

However, because WeChat doesn’t have a large user base in Hong Kong, the virtual red-envelope tactic won’t be as effective, Chen said.

In addition, unlike rival Alibaba Group Holding Ltd., which operates Taobao and Tmall, Tencent does not run any e-commerce sites of its own, cutting off another avenue for spreading its payment service, Chen said.

Like Alibaba, the main way that Tencent promotes WeChat Pay in Hong Kong is by teaming up with local retailers.

The venture, which created AlipayHK, allows Ant Financial to target more local customers by using retail brands under CK Hutchison, the ports-to-telecoms conglomerate that owns more than 600 stores that sell a range of products, including telecommunications services, electronics and food.

Chen declined to comment on the Alibaba’s business presence, but said some of CK Hutchison’s stores in the city now also accept WeChat Pay.

Because no single mobile payment service is dominant in Hong Kong, Chen doesn’t believe getting a few months’ head start will make that much of a difference.