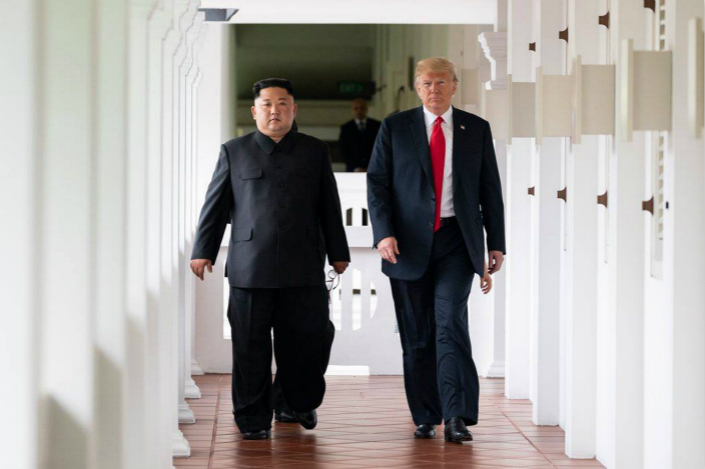 *The leaders of the U.S. and North Korea met for the first time on June 12, afterwards releasing a joint statement promising to work together to build long-lasting peace on the Korean Peninsula

*While the Chinese and South Korean governments praised developments, observers encouraged caution, pointing out that the statement’s language was weak and that concrete achievements are still a long way off

(Beijing) — The historic meeting between U.S. President Donald Trump and North Korean leader Kim Jong Un in Singapore has generated praise from China and South Korea over the new commitment to peace, but also skepticism from observers over prospects for the denuclearization of the Korean Peninsula.

The highly anticipated summit saw Trump meet with Kim for several hours, including a working lunch on Tuesday, in the first such meeting between a sitting U.S. president and a North Korean leader. At the end of the summit, the pair released a four-point joint statement, promising to “join their efforts to build a lasting and stable peace regime on the Korean Peninsula.”

Their meeting resulted from a thaw in relations between the U.S, South Korea and the North since April, following a more hostile period in previous months marked by rhetoric raising the specter of war.

China, a long-time North Korea backer, said the bilateral meeting was important and of positive significance, as well as history-making. Chinese Foreign Ministry spokesman Geng Shuang said Beijing should also be credited for its important role in making the event happen. He cited China’s proposals of “suspension for suspension,” where each country would take steps to suspend activities deemed hostile by the other; and a “dual-track” approach that would see North Korea get security guarantees in return for abandoning its nuclear program.

“The facts have proved that the China-proposed ‘suspension for suspension’ initiative has materialized and now the situation is also moving forward in the direction of the ‘dual-track’ approach,” Geng said during a regular briefing Tuesday.

The meeting has been watched closely in South Korea, a country that is still technically at war with the North because the 1950-53 Korean War ended with an armistice instead of a peace treaty. President Moon Jae-in offered his gratitude to Trump in a telephone call, saying the U.S. president’s meeting with Kim “laid the foundation for peace not only on the Korean Peninsula but in the entire world.”

But in Japan, some bitterness was still apparent at how little attention was given to the issue of Japanese citizens who were abducted by the North, mostly in the 1960s and 1970s.

Japanese Prime Minister Shinzo Abe indicated Tuesday that his country will seek an opportunity for direct talks with the North Korean leader to resolve the issue of Pyongyang’s abductions of Japanese nationals via a summit between the pair. Tokyo wants U.N. sanctions on North Korea maintained to pressure the country into concrete action on resolving the abductions as well as nuclear and missile issues, Abe said.

Skepticism among outside observers also ran deep in many places as some said the joint statement fell short of explicitly reaffirming the principle of comprehensive, verifiable and irreversible denuclearization of the peninsula, and specifics on the possible pullout of American troop from the area.

James Acton, a senior fellow at the Carnegie Endowment for International Peace, wrote on Twitter that the denuclearization language in the document is meaninglessly weak for several reasons. “For DPRK, ‘denuclearization of Korean Peninsula’ in the joint statement does not amount to unilateral disarmament by the North,” he said, using the abbreviation for North Korea’s official name.

Citing the Chinese maxim that a journey of 1,000 miles begins with the first step, Graham Allison, a professor of government at Harvard Kennedy School, said that complete denuclearization of the North could stretch at least 1,000 miles. “So declaring victory at this point would be foolish,” he said.

“On the other hand, if one compares where we are today with where we were six months ago when we saw real prospects of ‘fire and fury,’ we can be thankful that Trump has taken a first big step down the most promising feasible path available at this point,” he said, referring to a phrase used by Trump during the earlier tense period of threats and name-calling.