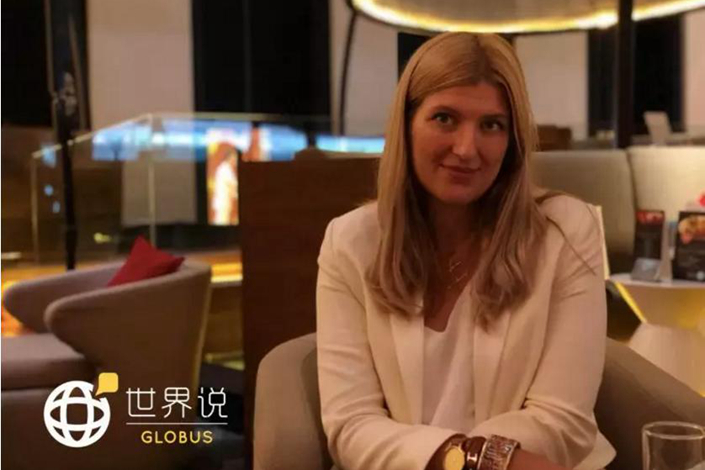 Beatrice Fihn, executive director of the International Campaign to Abolish Nuclear Weapons, said her organization did not receive a response from North Korea to the NGO's offer to pay for Kim Jong Un’s trip to Singapore. Photo: Caixin Globus

Earlier this month, the international NGO offered a portion of its $1 million in prize money to cover travel and accommodation expenses for North Korean leader Kim Jong Un, who met U.S. President Donald Trump in a historic summit in Singapore on Tuesday. During an interview with Caixin in Singapore on Monday, Beatrice Fihn, ICAN’s executive director, said that it was important to make sure the meeting went ahead to help global nuclear disarmament efforts, though the summit might be just “the start of the denuclearization process on the Korean Peninsula.”

Fihn, a fierce critic of Trump over his “America first” policy and apparent retreat from the country’s leadership in global affairs, said China could play a bigger role on the international stage, particularly in its support for the Treaty on the Prohibition of Nuclear Weapons (TPNW) to contain the rising risk of nuclear proliferation.

Caixin: What brings you to Singapore?

Fihn: We have spent the last decades working behind the scenes with governments and international organizations on negotiating a pathway toward nuclear disarmament through the Treaty on the Prohibition of Nuclear Weapons (TPNW). We believe we have some lessons to learn, including the working method for this process, to support the denuclearization of the Korean Peninsula. So we are here to offer support and input to this negotiation, to draw attention to the fact that we need to solve any problems on nuclear disarmament. And it needs to be solved by international legal frameworks. It cannot be separated from the law that exists in international institutions (like the U.N., IAEA etc.). We presented our five-step plan, hoping we can provide some input to the meeting.

And do you think the summit will succeed in denuclearizing North Korea?

We support diplomatic efforts, and we believe that the meeting is a starting point. We hope it would be the start of a process. We want them to recognize immediately that nuclear weapons are causing catastrophic humanitarian consequences. And we would love to see the U.S. and North Korea, also China, to ratify the Comprehensive Nuclear Test Ban Treaty.

What’s your understanding of denuclearization of the Korean Peninsula?

Over the past few months, we have witnessed an unfolding drama about North Korea. Lots of twists and turns have happened. If you have to award a peace prize to a group/individual based on what we have gone through until now regarding the nuclear issue, which one would it be?

A peace process in North Korea is extremely positive, it is a huge contribution made this year. But at the same time, the U.S. and North Korea have threatened to use nuclear weapons. We have seen skillful diplomacy from South Korea President Moon (Jae-in), who has rejected the threatening tone and used diplomacy and negotiation to get us here. It is because of South Korea that we are here, not because of Trump’s threats and tweets. So if South Korea is going to join TPNW and reject nuclear weapons, Moon would be a great candidate for the Peace Prize.

It is about their political will and also public pressure.

ICAN has offered to pick up Kim’s (travel) tab using your Nobel Prize money. Where did this idea come from? Did you receive any response from North Korea?

We have worked to support the diplomatic process before, so this is not surprising to us. We saw an opportunity here to pursue nuclear disarmament. We want to make sure that it does not stumble based on ego or pride about who could pay. We are so committed to working for nuclear disarmament that we are ready to cover some costs to support the meeting in order to make sure it happens. But we have not received any response. It seems that the government of Singapore is covering the cost, so we can use our money for other campaign activities.

Most nuclear-weapon states are reluctant to eliminate their nuclear weapons, and their justifications for maintaining them are mainly based on the “nuclear deterrence” theory. This theory also seems to work for Kim, as it explains why Kim was so desperately seeking to acquire nuclear weapons so that his country could be protected from a U.S. attack. Would this idea be an obstacle in making big powers abolish their nuclear weapons?

ICAN has placed a heavy emphasis on the crucial role of international law as the only path to worldwide denuclearization. However, given the fact that most major powers in the world are not parties to the U.N. Nuclear Ban Treaty, and the Security Council’s (five permanent) members in particular still holding nuclear weapons in their hands, does it mean international law is weak in achieving worldwide abolition of nuclear weapons, and that we still have a long way to go?

It does not happen all the time. The treaty is the starting point for nuclear disarmament, and we will work to get more and more states to join it. Each month, there are new states joining the treaty, and more states joining the treaty will put more pressure on nuclear-armed states. International norms and pressure could have an impact on the states that are outside the treaty. We have seen that with other prohibition of weapons (like the land mine ban treaty, chemical weapons convention etc.). … So we hope that would happen in these two days as well. There is a huge scope also for nuclear-armed states to engage with it. We believe that China, for example, plays a significant role. In a time when the U.S. is receding from the international stage with “America first,” China will play a bigger role on the international stage, showing leadership, showing that they are prepared to work on nuclear disarmament on the multilateral level. So we would like to see China supporting and engaging the treaty even though they are not prepared to sign it without other nuclear states.

Obviously you’re not a big fan of Trump’s nuclear policy and (have called) him a moron on Twitter. However, would you give credit to Trump for the summit?

We believe in diplomacy, it is positive to see they are here and engaging, but we do worry about the unpredictability of Trump as we have seen in the G-7 (summit). We need international law and other countries, and international agents to anchor this so that he cannot just walk away.