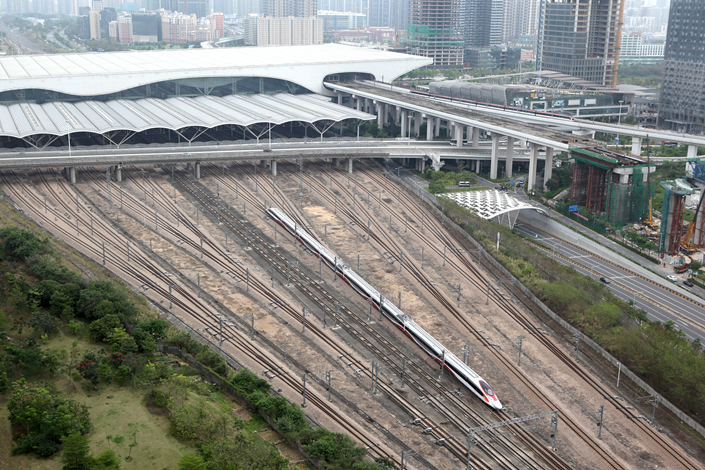 A bullet train on the Guangzhou-Shenzhen-Hong Kong Express Rail Link departs the Shenzhen station on May 14. Photo: IC

The city’s Legislative Council (LegCo) voted to allow the establishment of a joint mainland-Hong Kong border checkpoint in West Kowloon Station, the only Hong Kong stop on the new Guangzhou-Shenzhen-Hong Kong Express Rail Link (XRL) connecting the city to the Chinese mainland. Forty LegCo members voted for the bill, while 20 opposed it, with one abstention and one nullified vote.

Under the “co-location” plan, which was first proposed in July 2017, a section of West Kowloon Station will be designated a mainland port area, which will be regarded legally as “an area lying outside Hong Kong but lying within the Mainland.” Mainland laws will be applied in the port area, as well as on high-speed trains operating on the Hong Kong section of the rail link.

The XRL, which is targeted for completion in the third quarter of this year, is part of a wider effort to integrate the Hong Kong and Macau special administrative regions with the Chinese mainland. Test runs began in April on the railway, which is expected to cut journeys between central Hong Kong and Guangzhou, the capital of Guangdong province, to 48 minutes from the current two hours. Meanwhile, the world’s longest sea bridge, linking Hong Kong and Macau with Zhuhai in Guangdong, is expected to open later this year.

According to Hong Kong’s Transport and Housing Bureau, “efficient and time-saving customs, immigration and quarantine procedures are essential to realising the full potential of the XRL,” and the co-location arrangement will be critical to the rail link’s success. However, the plan has provoked fierce debate among academics and lawmakers in the region over whether the plan to give unprecedented power to mainland law enforcement officials within the city’s borders was unconstitutional.

Opponents of the co-location arrangement argue that the measure is illegal under Hong Kong’s de facto constitution, the Basic Law, which prohibits mainland laws from being applied within the region, with a few exceptions, such as laws stating the national anthem and national emblem of China.

However, proponents say the plan’s endorsement by China’s National People’s Congress Standing Committee in late 2017, as well as the approval it received from the Legislative Council on Thursday, provides a “sound legal basis” for its implementation.

Local media reported that over a hundred people demonstrated against the bill outside the Legislative Council Complex in Hong Kong on Thursday. Opposition lawmakers proposed 24 amendments to the bill, which were voted down by the council on Thursday, the final day of debate.