By Sun Lichao and Bonnie Cao 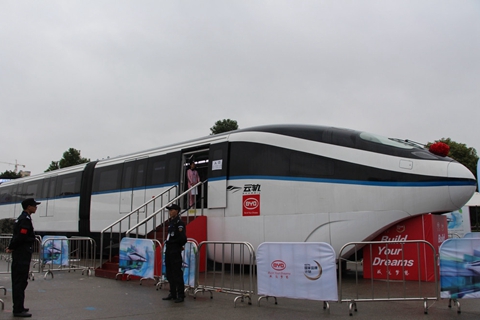 A BYD SkyRail train is shown at an exhibition in Hengyang, Hunan Province, October 2017. Photo: IC

The construction site of a monorail line to be built by Warren Buffet-backed electric vehicle maker BYD Co. in Hengyang, Hunan province, was idled shortly after a high-profile launch ceremony late last year. The monorail is one of several ambitious city transport projects halted by the central government amid concerns over excess urban investment.

The Hengyang project, dubbed a “demonstrative tourism line,” would be an elevated single-track rail line developed by BYD under the brand of SkyRail. The project was halted by the National Development and Reform Commission at the end of December, less than one month after top city leaders celebrated the beginning of construction, sources close to the matter said.

The project was halted because developers failed to report related information to the NDRC to obtain necessary approval and tried to skirt regulatory reviews, sources said.

The 7.8-kilometer (4.8-mile) rail was scheduled to start operation by the end of this year, but there has been no sign of resumed construction. A Hunan government official told Caixin that the city and provincial governments submitted a revised city transportation development plan to the NDRC for further review.

The central government since late last year has suspended several urban transit projects across the country amid concerns over public debt and overcapacity. Several extravagant infrastructure projects including subways and airports have been called off, including those in the Inner Mongolia autonomous region’s capital of Hohhot and in the regional manufacturing hub of Baotao.

Only cities with an urban population of more than 1.5 million are allowed to build light-rail lines, according to the current regulation. Hengyang has only 1.2 million residents, and BYD’s monorail is a type of light rail, according to several urban transit experts.

The Hunan government official told Caixin that BYD named its self-developed monorail system SkyRail in hopes of differentiating it from conventional urban light-rail projects that may be affected by the tighter scrutiny. The Hengyang SkyRail project bypassed national approval and required only city-level clearance after it was designated a tourism or demonstration line, the person said.

A BYD spokesperson told Caixin that the company has promoted the SkyRail brand with no intention of bypassing regulatory review.

The company is working closely with the Hengyang government to win new approval from the NDRC and is preparing for project resumption, BYD told Caixin.

BYD has been actively promoting its SkyRail system since 2016 in a bid to tap into China's multitrillion-yuan mass-transit market while competition in the domestic electric-auto market stiffens. Since the first 5.4-kilometer trial line was unveiled in October 2016 linking BYD’s headquarters in Shenzhen with a nearby high-speed railway station, the company has signed agreements on monorail projects with a handful of cities, including Yinchuan, Yichang, Guangan, Bengbu and Jilin, according to company website.

Last year, BYD announced a plan to invest as much as 5 billion yuan ($782 million) in building a rail transit manufacturing park in Hunan, including the production of the monorail vehicles and key components, according to Hengyang Daily in September. The total output value of the project is expected to hit 20 billion yuan within three years after it starts operation.