By An Limin, Zheng Lichun, Sun Lizhao and Han Wei 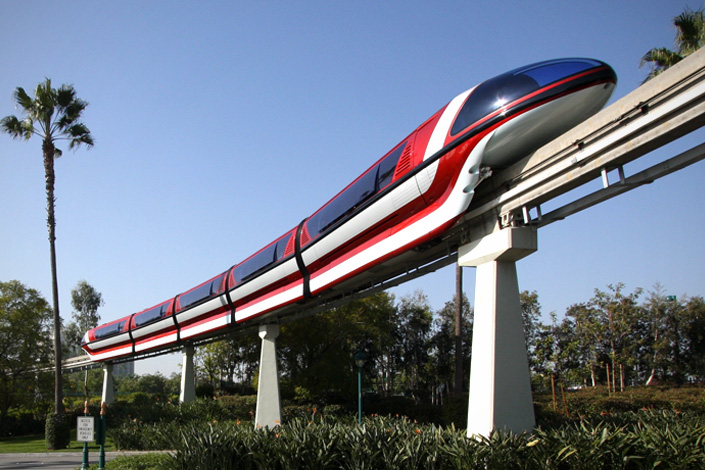 The 57-year-old Disneyland Monorail System, at the Disneyland Resort in Anaheim, California, was originally only a sightseeing attraction. It began carrying passengers in 1961. Photo: Kim A. Pedersen

(Beijing) — BYD Co. is setting its sights on China's expanding monorail transport system, hoping to duplicate its success in the battery and electric-car businesses. But BYD faces challenges to its qualifications to engineer trains, the speed with which it has entered the market, and questions about the origins of its train designs.

Wang Chuanfu, BYD founder and chairman, is nonetheless barreling ahead. Outside the city of Shantou in the southern province of Guangdong, he is ready to begin construction Wednesday of a monorail factory in an idle field dominated by wild grass. The 56 billion yuan ($8.1 billion) project will be the first monorail facility for BYD, which is about 8% owned by Warren Buffett's Berkshire Hathaway Inc.

BYD is plunging into the monorail sector just as domestic competition in the electric-auto market is stiffening. Regulators have been cracking down on the industry's abuse of subsidy programs, and government units are slashing financial support for electric carmakers. At the same time, China announced a plan in May to invest 4.7 trillion yuan over the next three years in public transportation infrastructure with an emphasis on developing urban light-rail systems, such as maglev, subways and monorails.

Since starting BYD in 1995, Wang has expanded the company from a cellphone-battery maker into an automobile manufacturer and later became the world's largest producer of electric cars. Born into a poor rural family, Wang was educated as a chemist and worked as a government researcher before becoming an entrepreneur. Now 50, Wang has a fortune of almost $5 billion, ranking 34th on the Forbes list of Chinese billionaires this year. Now he says he aims to ride the rail business to double the size of BYD, which last year had revenue of 80 billion yuan.

In October, BYD unveiled its "SkyRail" plan and started building a 5.4-km electric monorail line linking its headquarters in Shenzhen with a nearby high-speed railway station. Construction is set to be completed by July. BYD has also signed a preliminary agreement to build a 250-km monorail line for the Shantou city government, backed by a 60-billion-yuan, five-year credit line issued by China Development Bank.

In mid-November, the Xi'an city government in Shaanxi province announced an investment agreement with BYD, including a 2 billion yuan plant for monorail equipment and parts production.

Monorails offer a more-affordable option for public transit than subways. BYD said its monorail system will cost as little as one-sixth as much as an equivalent subway. But monorails also have much smaller passenger capacities than subways.

Since the first monorail for public transportation was built in 1898 in Germany's industrial Ruhr district, only a handful of cities, including six in Japan, have adopted a monorail for their urban networks. Other cities have used the technology only for short distances in special venues such as theme parks. In 2006 and 2011, the southwest Chinese city of Chongqing launched two monorail lines, built in partnership with Japanese companies.

BYD signaled its monorail ambitions in March when it set up a monorail division. In June, Wang told a meeting of company shareholders that BYD was ready to tap into the light-rail market. It was only four months later that BYD unveiled its prototype train and started a demonstration line inside its Shenzhen plant.

BYD's rapid progress has astonished many in the industry. Carlos Banchik, president of the International Monorail Association, told Caixin that he "has doubts" about BYD's technology development in such a short time because Hitachi and Bombardier both spent decades developing their monorail technologies.

But a BYD staffer said monorail development is much easier than many believed, and BYD's technology is mature enough for commercial production.

"The automobile has been developed for over 100 years, but we are already able to make it" after a relatively short period, the staff member said. BYD sold 58,000 electric and hybrid vehicles in 2005 to become China's largest new-energy carmaker, eight years after the company rolled out its first electricity-powered model.

In an email to Caixin, BYD said it has spent 5 billion yuan over the past five years on monorail research and development.

Another BYD source told Caixin that BYD's prototype train used many parts designed for its electric buses, even though they can't meet public rail durability requirements. The company is developing new monorail train parts that will comply with standards, the source said.

A potential hurdle is whether the company can obtain government certification. China currently has seven licensed train makers, all of them state-owned. Six are CRRC subsidiaries. A staffer at Shenzhen Metro Co., the operator of the city's subway, said BYD needs to go through strict assessments and complete 50,000 kilometers of test operations to obtain certification for rail equipment-making.

China hasn't set compulsory national standards for rail equipment, but a document issued in September by the National Development and Reform Commission and the Certification and Accreditation Association listed voluntary standards. Rail industry experts said that by 2020, all rail transportation products sold in China must meet those standards.

Uncertainties regarding business licensing and product standards have not yet slowed BYD in bidding for monorail projects with local governments. More than 20 Chinese cities have shown interest in working with BYD on monorail projects, Wang said in October.

BYD's willingness to invest helped it win the Shantou order away from CRRC Puzhen Bombardier, according to a Shantou government official. The official told Caixin that CRRC-Bombardier balked at investing in local plants. While acknowledging the licensing risks, the official said the city is counting on the project to boost the local economy. The plant will reach annual production of 10 billion yuan within three years, a local newspaper reported.

Wang projected that China's monorail market will demand 10 trillion yuan of investment, though some transportation experts called that estimate too optimistic. Zhong Jianhua, an expert at China Association of Metros, said 28 cities have launched feasibility studies for monorail lines totaling 2,800 km, involving potential investments of about 800 billion yuan, based on Chongqing's construction costs.

Meanwhile, as China faces mounting industrial overcapacity, established players like CRRC prefer to switch existing rail-equipment factories to monorail production rather than build new ones, according to a CRRC source.

Meanwhile, Bombardier is challenging the provenance of BYD's technology. The Canadian train and airplane giant said there are great similarities between its products and BYD's prototype train and accused BYD of patent infringements. Sources close to CRRC Puzhen Bombardier told Caixin that the company has hired lawyers and started collecting evidence to sue BYD.

"The whole design of the BYD SkyRail is copied from the CRRC Puzhen Bombardier," said Wang Jun, general manager of CRRC-Bombardier's marketing department. That includes exterior design and key technologies such as the automatic driving system and engine. Only minor changes were made, the executive said.

A technology team from BYD visited CRRC-Bombardier in January, saying BYD was interested in a partnership to build a monorail line in its factory area for internal transportation, CRRC's Wang told Caixin. After the visit, CRRC-Bombardier provided details about project planning and design and answered BYD's inquires about technical issues, he said.

A month later, "a friend said we might be cheated as BYD has been developing its own monorail system that is very similar to ours," the CRRC-Bombardier marketing manager said. CRRC later found that BYD teams visited other monorail-related subsidiaries of CRRC and Bombardier.

A BYD monorail specialist said there is nothing wrong with learning from others. "If you want to make something, it is impossible not to look at what exists," the specialist said. "In the automobile industry, rivals also study each other."

In an email to Caixin, BYD said its SkyRail is 100% self-developed with no imported technology.

Design imitation has existed widely in China's auto industry, but there has not yet been any successful infringement case, said an executive of a multinational automaker.

Nonetheless, according to the Shandou city official, "we are very worried that BYD may face a lawsuit" over infringement.