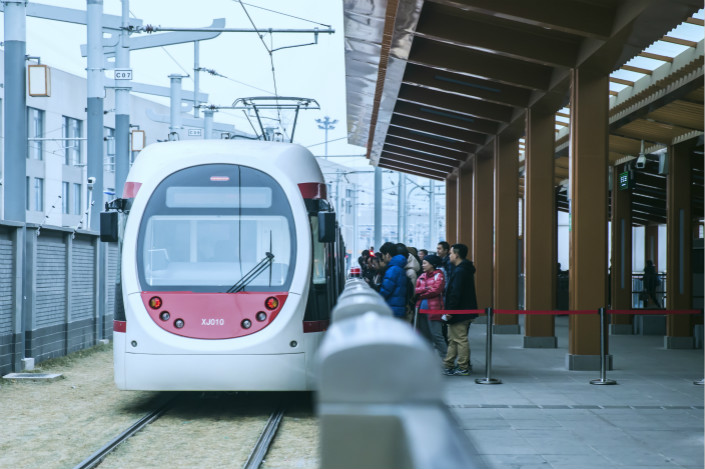 Passengers get on a train on Beijing's Xijiao Line. Photo: VCG

Beijing’s tightening grip on local government rail spending will not impact projects on which construction has already begun, Caixin has learned.

Early this month, Caixin reported that Beijing is mulling new policies that would raise the bar for local government infrastructure spending. To build new light railways or subways in the cities, they must meet stricter criteria regarding fiscal revenue, gross domestic product (GDP) growth and debt.

This left in doubt the fate of 14 cities whose transport projects have been approved but had failed to meet the new guidelines.

“The ongoing projects have been heavily invested in, a suspension would mean wastage and local governments can’t just call them off,” said a source from Chongqing Rail Transit Group Co. Ltd.

The source said however that those who have yet to start construction will take a hit, but it’s not yet known if these projects will be entirely scrapped.

The new guidelines may triple the fiscal and GDP requirements for subway and light rail systems, which means these cities will have to demonstrate greater economic strength in order to build the expensive networks.

Also, cities will have to show that their debt-to-GDP ratio has been lower than 120% for the three years before the submission of the application to the authorities.

Despite failing to meet the new rules, the Guizhou province city of Guiyang and Luoyang, Henan province, have vowed to continue with their subway projects — both of which obtained the green light from the central government in 2016.

As a broader measure to rein in regional debt, the central government put a halt last year to several extravagant infrastructure projects across the country, including in Inner Mongolia’s capital of Hohhot and the regional manufacturing hub of Baotao.

Local governments have insisted that infrastructure projects are crucial for economic development and are lobbying for more relaxed rules.