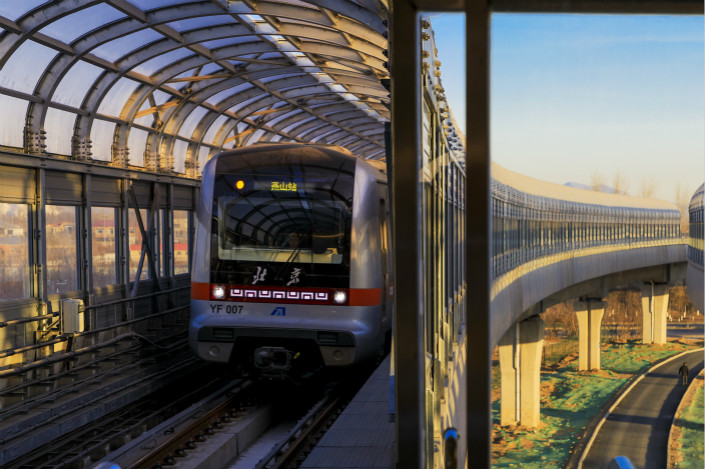 The new funding guidelines by the National Development and Reform Commission will likely triple the fiscal and gross domestic product requirements for subway projects, such as Beijing Yanfang line. Photo: VCG

China’s top economic planning body will raise the revenue requirements local governments must meet before building rail systems, in a bid to slow the growth of regional debt, sources close to the matter told Caixin.

The National Development and Reform Commission (NDRC) will consider the fiscal revenue, gross domestic product (GDP) growth and debt ratio of local authorities — all governments besides the central government — when it weighs whether to approve the construction of rail networks including subway and light rail systems.

The powerful ministry-level body has the power to green light or call off such infrastructure projects.

The NDRC is reportedly seeking feedback from provincial governments on the proposed guidelines, which will likely replace the 81 Document issued by the State Council — China’s cabinet — which has been used to assess such matters until now.

The 81 Document stipulates that cities can begin a subway project only after meeting basic conditions such as having annual fiscal revenue above 10 billion yuan ($1.57 billion), GDP above 100 billion yuan and a permanent urban population exceeding 3 million. It also requires the estimated rush hour ridership of the proposed system to exceed 30,000 individuals per hour.

The new guidelines will likely triple the fiscal and GDP requirements for subway systems, the source close to the NDRC told Caixin, which means cities will have to demonstrate greater economic strength in order to build the expensive networks.

Also, cities will have to show that their debt-to-GDP ratio has been lower than 120% for the three years before the submission of the application to the NDRC.

The new guidelines are also likely to triple the revenue and GDP requirements for light rail projects, with the revenue threshold to be lifted to 20 billion yuan and the GDP figure to be set at around 200 billion yuan.

“The objective is to contain debt risks at the local government level, forbidding them to borrow irregularly via PPP projects,” the source said. The central government has tightened control on Public-Private Partnerships (PPPs), a mechanism that was designed to fund public programs by introducing social capital in order to raise capital efficiency and ease fiscal strain on government coffers.

The central government called off several extravagant infrastructure projects including subways and airports, including those in Inner Mongolia’s capital of Hohhot and in the regional manufacturing hub Baotao. More than 30 billion yuan was needed for the construction of the Baotao subway, an amount which the central government decided the city could not afford and would be better spent on improving residents’ livelihoods and helping local companies to develop.