The Lawyer Who Helped Firms Invest in North Korea

By Pei-hua Yu and Li Rongde 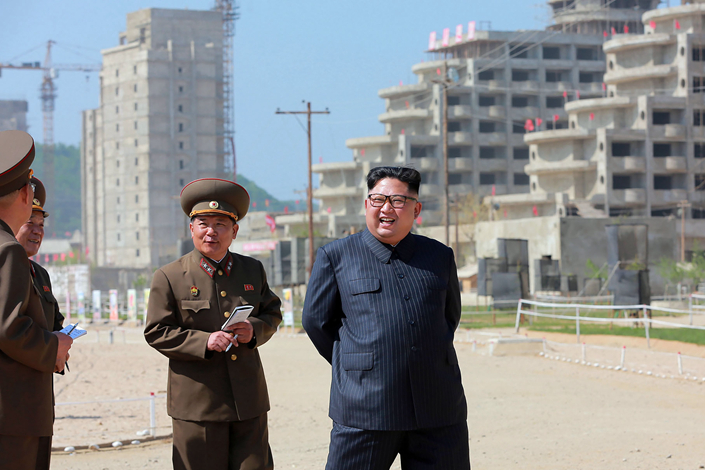 This undated picture was released by North Korea's official Korean Central News Agency (KCNA) on May 26.

When news broke that U.S. President Donald Trump and North Korean leader Kim Jong Un were going to meet, Singaporean lawyer Kelvin Chia said he began receiving inquires from around the world about investment opportunities in the reclusive country.

Chia’s law firm, located in Singapore’s central business area, was one of only three foreign-funded law agencies allowed to operate in North Korea, but pulled out due to United Nations sanctions led by the U.S.

The veteran lawyer said in a recent interview with Caixin Globus that he hopes the historic Trump-Kim summit will lead to the gradual lifting of sanctions, which have cast a long shadow over investment in North Korea for over a decade.

Chia set foot in North Korea for the first time in 2004 when he escorted representatives of a Europe-based pharmaceutical firm to Pyongyang. The trip came in the wake of the Six-Party Talks, which aimed at resolving the nuclear crisis on the Korean Peninsula late in August 2003.

During the visit, Chia said he was invited by North Korean authorities to open a branch of his firm in the capital, but he was taken aback by how little legislation the country had to regulate the legal industry at the time. He later provided the North Koreans with the relevant laws of China and Vietnam for reference. “Within a month, I was given a license by the country’s Supreme People’s Assembly to open a law firm,” he said.

Chia ran his business out of an office in an upmarket hotel along the Taedong River in central Pyongyang, and he even hired two North Korean lawyers.

Enthusiasm from investors ran high in the first few years of his practice, but the gold rush into North Korea never came due to protracted U.N. sanctions, he said.

His firm had only three clients a year on average from 2004 and 2013, including mining and foodstuff companies. As international sanctions escalated over the past decade, it became harder to invest in North Korea and keep businesses afloat, he said.

For one thing, when mining wasn’t on the U.N. investment blacklist, some multinational mining firms looked into opportunities in North Korea. However, they found that a key chemical used in gold mining — sodium cyanide — was barred from being brought into the country as it can be used in the manufacture of chemical weapons.

The ongoing sanctions have not only drastically limited the scope of business for foreign investors, but also overshadowed opportunities in sectors still open to investment, according to Chia.

Chia’s firm once helped a Singapore-based company look into possible businesses in North Korea, but the company balked due to opposition from shareholders in Europe who were worried about infuriating the United States.

“Some clients from the European Union received blunt warnings from their governments not to have any business ties with North Korea,” he said.

Banks are particularly jittery about any business links with North Korea even if they do not have branches in the United States. Many North Koreans in Singapore sought Chia’s help to open a local bank account, but he couldn’t help, Chia said. The Monetary Authority of Singapore does not explicitly ban North Koreans from opening bank accounts, but the few banks that once served North Korean customers have stopped doing so due to U.S. pressure, leaving Singapore-based North Koreans with no other option but to use cash.

An executive with a Japanese bank in Singapore told Caixin that many foreign banks are being extra cautious, writing blacklists longer than those published by the U.S. Treasury Department of Office of Foreign Assets Control when it comes to evaluating how risky it is to do business with North Korea and Iran.

Bureaucracy and a lack of transparency has also hampered investment in North Korea, and the authorities don’t publish statistics, making reliable data about the country hard to come by.

While North Korean officials are friendly to prospective investors, many local investment laws, though well-written, remain “untested” as few case studies are available, he said.

Trump indicated at a media briefing after his meeting with Kim on Tuesday that sanctions will remain in place until the completion of North Korea’s denuclearization because such sanctions have played a very important role in addressing the nuclear issue. However the process of denuclearization could take more than a decade, according to nuclear specialists.

Renewed interest in North Korea by investors in the wake of the highly anticipated summit is all too familiar to many as it’s reminiscent of optimism on display between the start of the nuclear talks in 2003 and 2004, and North Korea’s subsequent exit from the talks.

“I’m hoping the Trump-Kim summit could lead to suspension or lifting of sanctions,” he told Caixin. “Otherwise, we’re going to have the same conversation in 10 years.”

Note: Caixin Globus is an unit incubated by Caixin Media to focus on international news