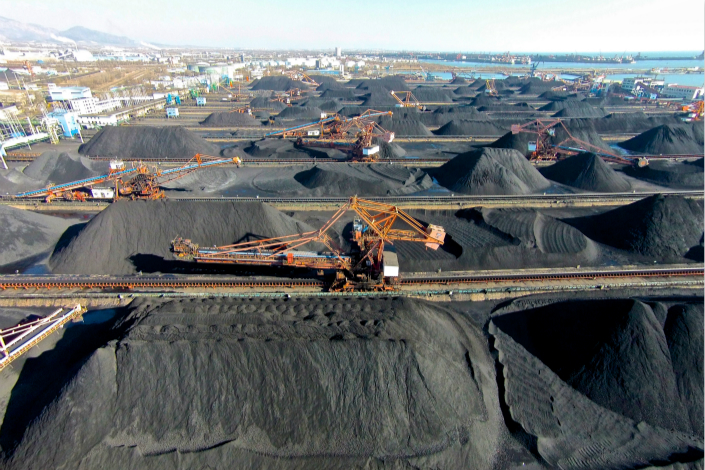 Piles of coal are seen in Qinhuangdao Port in Hebei province in December 2016. Photo: VCG

The Chinese government has reduced restrictions on coal imports at the nation’s major ports in response to concerns about higher prices and regional power shortages, as demand for electricity jumps during the peak summer months.

Limits on how quickly customs ports can process coal imports were eased, with ports in Shandong, Fujian and Guangzhou provinces having accelerated their clearance times to 10 days from 15 working days, according to industry platform Coal Lakes. Other ports across the country have also been told to prioritize handling coal for power generation.

China’s port inventories are well-stocked and coal plants are well-prepared for the extra demand as air conditioners whir into action across the country, according to Zhang Zhibin, an analyst with COSCO Coal. Nevertheless, the National Development and Reform Council (NDRC) has already warned that some areas may suffer power shortages, with provincial bodies in economic powerhouse provinces Guangdong and Shandong announcing they are already under strain due to an unusually warm May.

The country’s electricity demand increased significantly in early 2018, with 2.66 trillion kilowatt-hours consumed from January through May, an increase of 9.75% compared to the same period last year. Coal consumption at China’s six biggest power generators in the country’s southeast reached its second-highest level in history last month, when they burned through 724,000 tons a day. The six include China Guodian Corp. and Guangdong Yudean Group Co. Ltd., and are often used as a benchmark for the country’s coal industry.

The increased demand resulted in unusually high spot coal prices in May, leading the NDRC to make its first direct intervention in the market in two years. The agency ordered utilities to stop stockpiling thermal coal and told miners to increase production by 50%.

NDRC’s intervention initially pushed down prices, but demand continued to rise into June, causing prices to rebound. At the northern port of Qinhuangdao, one of China’s two major coal import points, seaborne thermal coal prices reached 698 yuan ($108.40) a ton on June 15, up 8.44% from a week earlier. Despite their recent rapid rise, prices have peaked, argued Zeng Hao, the deputy general manager of consultancy Fenwei Information Services Co., Ltd., due to the lack of any new factors that would push prices higher in the months ahead.

China’s coal-power generation companies are expecting to see a continuation of their strong performance in the first half of this year during the summer months. Power giant China Shenhua Energy Co. Ltd. said that coal sales in April reached 42.8 million tons, an increase of over 20% compared to the same period last year. China’s total energy sales were up 10% year-on-year in April, with electricity sales rising 11% in the January-to-April period compared to a year earlier. Datong Coal Mine Group Co., Ltd. and Shanxi Coking Coal Group Co. Ltd. also said they expect higher profits compared to the same period last year.

Analysts appeared unconcerned about the impact of the U.S.-China trade conflict on the domestic coal market. “Taking into consideration the higher cost of freight, U.S. coal was never a cost-competitive supplier to China on a delivered-quality-adjusted basis,“ said Shirley Zhang, an analyst at consultancy Wood Mackenzie.