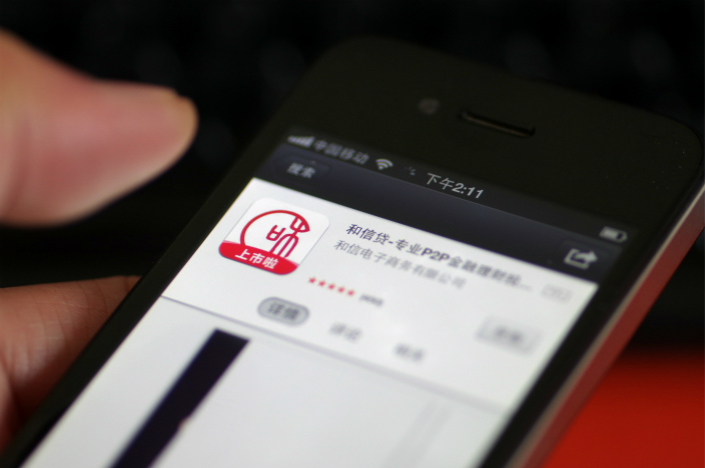 Loans facilitated by peer-to-peer lender Hexindai grew 237% year-on-year in the latest quarter, making it one of the big players in the industry to continue growing. Photo: IC

The CEO of one of China’s biggest peer-to-peer (P2P) lenders has estimated the number of companies offering such loans could shrink by about a fifth by the end of this year even though regulators have pushed back a registration deadline to weed out noncompliant players.

“I expect that around 400 firms will be eliminated in the second half of 2018, leaving fewer than 1,500 online lenders by the end of the year,” Zhou Xinming, CEO of Nasdaq-listed Hexindai Inc., told Caixin in an interview on Friday.

The number of active P2P platforms has already slumped by almost half since peaking at 3,383 in January 2016, according to data from research firm Wangdaizhijia, which showed 1,877 such lenders at the end of April 2018. The decline has come amid an almost two-year campaign by regulators to clean up a sector plagued by fraud, usurious interest rates, excessive lending and bad management.

But loans are still growing for the big players. Hexindai facilitated $418 million in loans during the fourth quarter ended March 31, up 237% year-on-year, according to its earnings report released on Friday. The number of borrowers using its platform increased 285% to 33,322 and the number of users lending money via the platform jumped 103% to 62,039.

Following sweeping rules aimed at controlling risks in online lending issued in December, local banking regulators were given until the end of June to weed out noncompliant P2P lenders and register compliant players.

Several industry sources told Caixin as early as April that the deadline had been changed, although there has been no statement from the financial authorities.

In what appears to be the first official confirmation of the delay, Li Junfeng, director of the inclusive finance department at the China Banking and Insurance Regulatory Commission, told a conference in Shanghai last week that the P2P registration process will not be completed this year, according to media reports of his speech. Li did not give further details.

Controlling P2P lending may not necessarily be a priority for regulators right now, a senior executive at a Chinese online lender who declined to be identified told Caixin. “Financial regulators are very focused on reining in the asset management industry this year. They are also cracking down hard on initial coin offerings and cash loans,” the source said. It also takes time to unify registration standards among local regulators, the executive said.

“There has been consolidation and restructuring among government entities and regulatory bodies since the National People’s Congress in March, including the banking and insurance regulator, so that’s my sense of why there has been a delay" in P2P registration, said Tang Ning, CEO of CreditEase Holdings (Cayman) Ltd., which owns Yirendai Ltd., one of the biggest P2P lenders in China, in an interview with Caixin in May.

But even though noncompliant lenders may have had a temporary stay of execution, more companies look set to exit an industry that’s become increasingly regulated. Investors, who provide the funds that are lent to through P2P platforms, are already moving their money from smaller platforms to larger ones, Zhou said.

Hexindai released its earnings statement on Friday. Despite reporting a 303% year-on-year jump in net income to $17 million in the fourth quarter of its fiscal year to March 31, the company’s shares slumped by more than 20% in Monday trading. U.S.-listed peers such as Qudian Inc. and LexinFintech Holdings Ltd., have also seen their shares tumble after recent earnings reports.

“The industry has hoped for something like BCS for a long time,” Zhou said.

Hexindai has just signed a contract with BCS to share and use data from the platform.