By Jason Tan and Zhao Zuoyan 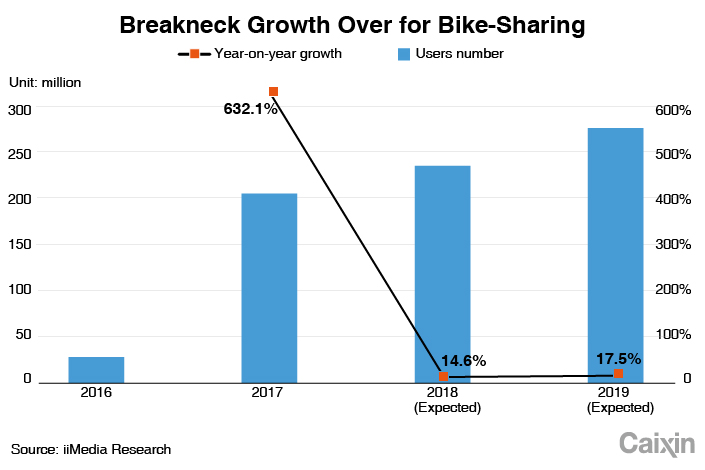 After experiencing a massive boom in 2017, China’s bike-sharing market is expected to shift into a slower lane this year, a report said.

As many as 235 million people will ride a shared bike this year, an increase of 14.6%. This is forecast to rise to 276 million in 2019, a year-on-year rise of 17.4%, according to a report (link in Chinese) released Thursday by iiMedia Research Group, a mobile internet consultancy based in Hong Kong.

“Leading bike-sharing brands have built up a strong user base and economies of scale. They no longer need to employ cutthroat pricing to win market share going forward,” the report said.

It was only two years ago that brightly colored bicycles owned by startups Beijing Mobike Technology Co. Ltd. and Ofo started appearing on the streets of Beijing and Shanghai, with the companies testing the waters of their respective business models.

Unlike older city-sponsored services, the new generation of bike-sharing companies uses mobile apps and location-finding technology to let subscribers find and unlock bikes parked anywhere on the street. When riders reach their destination, they can park and lock the bikes anywhere, paying a small fee based on ride distance or time of use.

This model has created controversy, with some praising it as innovative but others complaining about thousands of bicycles cluttering city streets. Some cities have even moved to ban the introduction of new bikes.

More than 40 latecomers have rushed into the bike-sharing industry, fueling cutthroat competition that saw players spend furiously to offer steep discounts in a bid to win a larger market share. Mobike and Ofo often have “ride for free” periods — frequently on the same day — and hand out small cash prizes and coupons. Many of the rivals to the sector’s main two players have since folded, unable to keep pace with the spending.

According to iiMedia Research, there were only 28 million shared bike riders in 2016. But the number exploded by over 630% to 205 million the next year.

However, the sector still is still burning cash.

Ofo last week embarked on a 100-day crash program aimed to turn it from a money-losing to a profit-making firm, by cutting costs and diversifying its offerings, venturing into advertising and financial products.