By Qu Yunxu and Mo Yelin 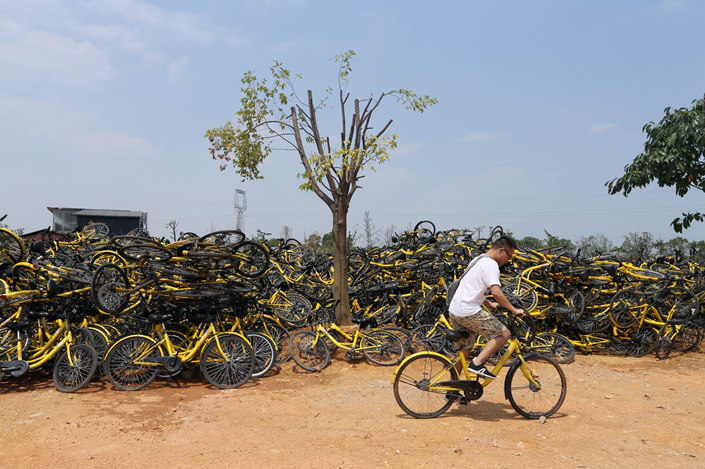 A man cycles past piles of Ofo shared bikes which are stored near a Chengdu subway station on June 6. Ofo says they are only kept there temporarily while they wait for maintenance. Photo: VCG

*Ofo is the only major independent bike-sharing firm left standing, after rival Mobike was acquired by group-buying giant Meituan-Dianping

*The company aims to go from a money-losing to a profit-making firm by cutting costs and diversifying its offerings, venturing into advertising and financial products

Bike-sharing startup Ofo, known for its legions of bright yellow bikes parked around major Chinese cities, has launched a crash program to transform itself from cash-burner to money earner over the next 100 days.

The program began in early May and will run through August. It is aimed at showing that the cash-guzzling firm can be profitable, especially to two of its largest backers, internet giant Alibaba Holdings Group Ltd. and car-sharing giant Didi Chuxing, Ofo co-founder Yu Xin told Caixin in an interview.

The campaign comes at a time when some of Ofo’s suppliers have reportedly stopped doing business with the company amid negative headlines warning of looming layoffs.

Yu hinted his company has already carried out such layoffs as it cut its maintenance workforce to 12,000 at its peak late last year to 9,000 now. “Ofo previously expanded too irrationally. Now we are sorting out our staff,” he said, adding that Ofo has never stopped recruiting.

“Only making profits can be a sustainable business model for shared-bike companies in a market with such low barriers to entry, where market size is determined by basically how much cash is burned to attract new users,” he said.

Ofo, whose name written out is meant to look like a person riding a bike, was one of the earliest players in China’s bike-sharing industry, alongside top rival Beijing Mobike Technology Co. Ltd. The companies differ from traditional municipal shared-bike services by using mobile and location-based technology that allows users to unlock bikes anywhere they can find them, and then park wherever they want and get charged a small fee.

The business is part of China’s broader embrace of shared economy concepts that have seen entrepreneurs look for opportunities in everything from shared basketballs and umbrellas to shared offices. But the explosion of millions of bikes onto city streets has also led to controversy from local residents and government officials who complain of the clutter and disarray.

Since the height of the explosion last year, most smaller players have folded, leaving Ofo and Mobike as two of the last companies standing, feeding off their hundreds of millions of investor dollars raised over the last two years. Mobike found a wealthy backer when it was acquired by group-buying giant Meituan-Dianping earlier this year for $2.7 billion, leaving Ofo as the last major independent with a cash-addiction problem it needs to kick.

Ofo has insisted that burning cash is not a long-term plan, even as CEO and co-founder Dai Wei has declined to cede more control to Didi and Alibaba, which now hold roughly 23% and 15% of the company’s shares respectively.

But the company’s current account shows just how precarious the situation is.

As of May, Ofo had less than 500 million yuan ($78 million) in readily available funds and had already accumulated 1.5 billion yuan in debt, including 1.2 billion yuan to bike suppliers, according to two sources familiar with the company’s financial situation.

When the shared bike idea was launched in 2015, investors hoped that operators could make money through millions of small fees paid each time a rider used the services. But after three years with no profits for any major players, investor confidence has diminished, market watchers said.

In order to reduce costs, Ofo, which reportedly has some 6 million bikes in China alone, stopped adding new bikes onto streets this year, according to Yu. As part of the 100-day road to breaking even, Ofo has also sought to diversify into other services, including advertising and financial services.

The company now offers ads on its bikes in some smaller cities, though it could be challenged in top cities like Beijing and Shanghai, where the practice is forbidden. Ofo has also begun providing information based on its 63 million monthly active users to some financial service platforms as another way to generate revenues, according to a source close to the firm’s board.

One of the biggest points of concern is the huge pot of subscriber deposits the company holds, which typically total around 100 yuan per person or more.

The company announced early June that it would call off a program in partnership with Alibaba’s Ant Financial Services Group that let users ride without making a deposit in 20 cities, including Shanghai, Guangzhou and Wuhan. That boosted speculation that the company was using the deposits to help fund its operations.

“I don’t understand why Ofo would take such a move, which is literally an admittance that it has used the deposit funds before,” said one investor, who is also involved in the bike-sharing business.

The Mobike-Meituan merger in April this year came after Ofo and Mobike investors had reportedly pressured the pair to merge late last year. One possible plan, which would have given ride-hailing giant Didi greater control of the new company, ultimately failed due to the fierce resistance from both startups.

Ofo’s relationship with Didi, considered the Uber of China, has deteriorated since July 2017, as the pair fought for influence over the company’s future development, Caixin has learned. Its second-largest backer at Alibaba has also begun to drift away to a smaller firm called Hellobike, which received nearly $300 million from the e-commerce giant earlier this month.

Hellobike, which mainly focuses on smaller cities, has developed quickly in recent months, and closer Alibaba-Hellobike ties would come at the expense of Ofo, investors said.