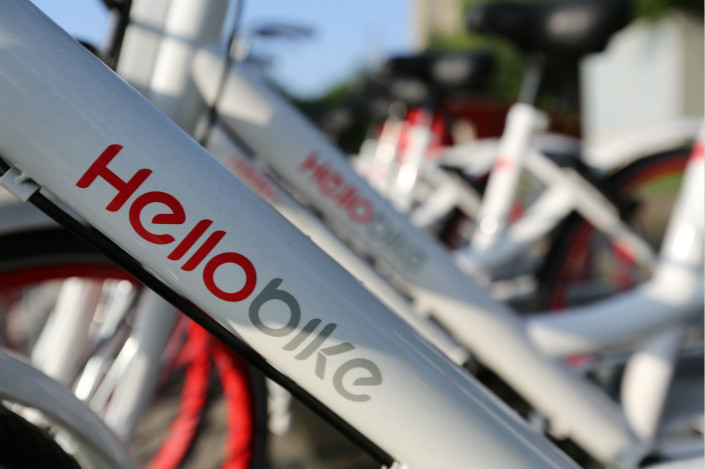 A new multimillion-dollar investment in Hellobike has firmly established the bike-sharing company as the No. 3 player in an industry that many assumed would be an Ofo-Mobike duopoly. Photo: IC

The investment comes as China’s runaway bike-sharing industry is going through a transition, changing from the cash-burning free-for-all of the last two years to a more-consolidated industry that has experienced the rise of two dominant leaders and the demise of several lesser competitors.

The situation raises the question: Why are Fosun and its partner investors backing an also-ran like Hellobike in what some have assumed to be a two-horse race?

For its part, Hellobike, after securing an Alibaba affiliate as an investor and selling itself to a larger company, has with its parent company locked up the third spot in the industry, following market leaders Beijing Mobike Technology Co. Ltd. and Ofo Inc.

At present, Ofo has about 10 million bikes worldwide, and Mobike operates around 8.4 million. Although Hellobike has roughly half the number of bikes as the two industry leaders, “its coverage in some fourth-tier cities have overtaken Mobike and Ofo,” a person close to Hellobike investor Alibaba Group Holding Ltd. told Caixin.

And it is in these smaller cities that Hellobike’s investors see opportunity. “(Our) research showed that there is a huge space in the market for diversified transport in the third-and-lower-tier cities,” said Cong Yonggang from Fosun TMT & New Technology and New Economy Investment Group, the Fosun subsidiary that made the investment.

In April 2016, Mobike and Ofo launched their first fleets of shared bikes in Shanghai. Today, about a dozen smaller competitors across the country also provide two-wheelers that allow users, after paying a deposit, to unlock a bike via a smartphone app.

Unlike traditional public bike-rental services that require users to return their bikes to set stations, Mobike and its competitors allow users to park their bikes essentially anywhere in public. These services cost around 1 yuan (15 U.S. cents) an hour and are often discounted as the bike-sharing companies compete for market share.

In less than two years, Mobike and Ofo have emerged as “unicorns” — an industry term for startups valued at more than $1 billion. Each one has secured internet giants as their main backers. Tencent Holdings Ltd. is now Mobike’s largest shareholder, and Ofo has investments from Tencent-backed car-hailing firm Didi Chuxing and Alibaba.

Three weeks ago, Hellobike completed a funding round, taking in $350 million from investors including the Alibaba-affiliated Ant Financial Services Group.

The move was seen by market observers as Alibaba taking a shot against its old rival Tencent, which has influence with both Mobike and Ofo.

Hellobike’s rise in the sector was a result of not only Alibaba’s support, but also its sale in October to a larger peer, Youon Bike, which also runs a traditional bike-sharing business. The Youon-Hellobike alliance emerged as China’s third-largest bike-sharing entity.

At the same time, many smaller rivals have pedaled out the game. Startups including Kuqi and Bluegogo have shut down while still owing their users large sums of unrefunded deposits.

In emerging industries, it is typical for companies to compete for market share by burning through investment capital to provide better services and larger discounts. Smaller companies, which are usually less well-funded, often don’t survive.

The price war has parallels to the car-hailing industry, which initially experienced fierce competition but is now dominated by Didi Chuxing, which swallowed rivals Kuaidi and Uber China.

The bike-sharing business will eventually head in the same direction: monopoly, said Wu Dong, a professor at the School of Management at Zhejiang University who studies innovation, startups and business strategy.

But so far, the largest bike-sharing companies seem bent on competing, as their major shareholders, the Tencent alliance and Alibaba and its affiliates, are reluctant to allow a merger between the two.