By Zhou Qijun and Mo Yelin 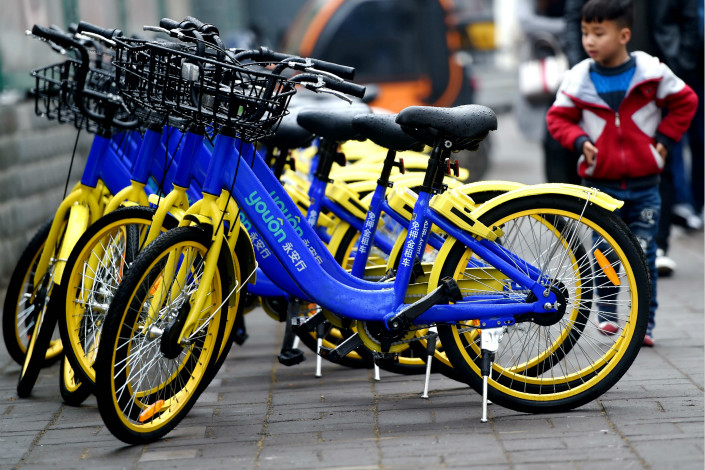 Shanghai Yunxin Venture Capital Management Co., a subsidiary of Ant Financial, took part in the latest round of fundraising by Ditan Keji Ltd., Youon’s bike-sharing unit, which raised 2.3 billion yuan in the round. Photo: IC

Alibaba’s financial technology affiliate, Ant Financial, has become the largest shareholder in the bike-sharing unit of Youon Bike after investing 2 billion yuan ($303 million) to increase its stake to 32%.

Shanghai Yunxin Venture Capital Management Co., a wholly owned subsidiary of Ant Financial, took part in the latest round of fundraising by Ditan Keji Ltd., Youon’s bike-sharing unit, raising its holding from 13%, according to a statement from Shanghai-listed Youon on Monday. Ditan Keji raised 2.3 billion yuan in total from three companies and several individual investors.

Jiangsu province-based Youon, whose main business is selling and managing bike-rental systems for local governments in small cities, is muscling in on the private bike-sharing market that has boomed over the last two years, but also poses a growing threat to the more orderly government-backed rental systems that use fixed docks at designated sites along major roads.

Youon, which says it operates public bike-rental business in around 200 cities, is a relative latecomer to the private bike-sharing frenzy, which allows riders to pick up and leave bikes wherever they choose. The market is dominated by Ofo and Mobike, but Youon is aiming to increase its market share through its Ditan Keji subsidiary and is targeting mainly third-tier and fourth-tier cities. In October, Ditan Keji took over Shanghai-based Hello Bike, which operated shared bike services in more than 60 cities.

The Ministry of Transport estimated earlier this year that the country has around 70 bike-sharing brands and more than 16 million rental bicycles on the streets.

The increasingly cutthroat market has already seen the collapse of several smaller players, including Bluegogo, 3Vbike and Wukong, as their losses mounted and they ran out of cash to fund their businesses.

The industry has also come under fire over the chaos and congestion caused by thousands of bikes parked or abandoned on the streets. In August, the government issued national guidelines to regulate bike-sharing services, and many local authorities have stepped in with their own rules. The southern city of Guangzhou in August joined other major cities such as Shenzhen and Shanghai in banning bike-sharing companies from adding new two-wheelers. In November, market leaders Ofo and Mobike were singled out by the Guangzhou government for violating the local regulations.

Correction: Updates headline from previous story to reflect the amount of investment at $348 million.