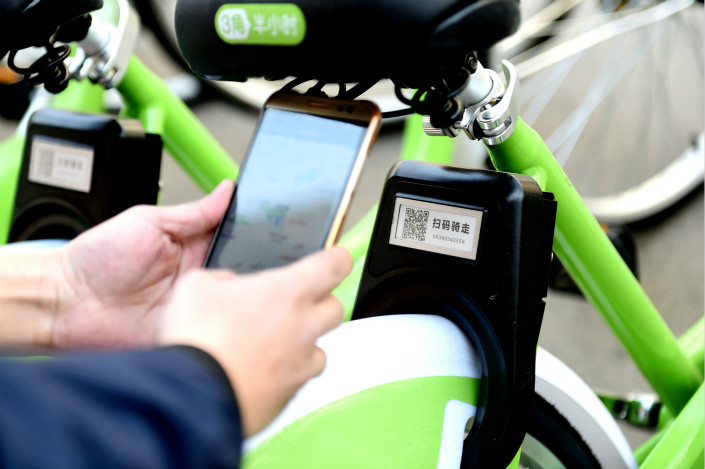 The China Consumers Association said that Kuqi “should cooperate with relevant departments during the investigation process and shoulder legal responsibility” and that the association "won’t let the company get away with it.” Photo: Visual China

Yet another bike-sharing startup is drawing criticism for failing to return user deposits.

Beijing-based Kuqi — a second-tier player in the fast-growing sector — has been the target of more than 2,000 complaints to China’s consumer protection association over the last month.

The unpaid deposits may amount to hundreds of millions of yuan, said the China Consumers Association (CCA). The association also said Kuqi had deliberately created obstacles for the refund process.

Kuqi “should cooperate with relevant departments during the investigation process and shoulder legal responsibility,” the association said in the post. “CCA will adopt appropriate measures to safeguard consumers’ interests and won’t let the company get away with it.”

Kuqi — whose name roughly translates as “cool ride” — was founded only a year ago, but claims to have more than 1.5 million users. The firm made headlines in August when media outlets first reported that it wasn’t refunding some of the up-front deposits users are required to pay to use the service.

Kuqi’s problems are the latest to hit China’s increasingly consolidated bike-sharing industry, after a two-year frenzy in which several players have gone under, including Wukong and 3Vbike.

The troubled startups have become a source of concern for regulators. In addition to complaints of un-refunded deposits — from multiple companies — cities have also been overrun with bicycles, many of which are in states of disrepair.

China’s Ministry of Transport said last month that it will “take proactive measures” to better prevent and manage the problems. In May, the ministry and China’s central bank released a draft report that said the deposits must be strictly separated from other funds, to avoid misuse.

Industry leaders Ofo and Mobike earlier this month denied accusations of financial mismanagement, amid reports that 6 billion yuan ($909 million) of user deposits had been spent supporting their rapidly expanding businesses.

In November, Mobike and Ofo were singled out by the city government of the southern metropolis of Guangzhou for violating local regulations that banned bike-sharing companies from adding new two-wheelers to the city’s streets.