Not Live From Beijing, It’s Not Saturday Night! 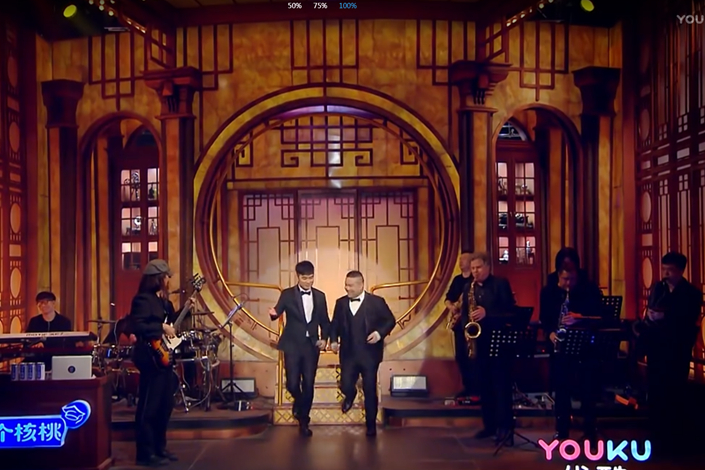 The Chinese version of the iconic American comedy sketch show “Saturday Night Live” (SNL) has finally premiered. But China’s version wasn’t live — nor was it that popular.

Co-produced and broadcast by Alibaba Group Holding Ltd.’s online video unit Youku, “SNL China,” the first hourlong episode of which was aired on Saturday, inherited the American show’s opening monologue, sketches and music slots, but the show was taped in advance and edited.

The production process was “certainly very different from the original show,” as the show, filmed a few weeks ago and then reviewed by the regulator — which objected to some content — “looked worse than when it was filmed,” a person close to the production team told Caixin.

The original SNL, which premiered in 1975, is one of the longest-running network television programs in the U.S. Famous for its political jabs and adult humor, both of which are forbidden from Chinese television shows, the show has helped launch the careers of many comedy legends, including Eddie Murphy and Bill Murray, and licensed foreign versions have aired in countries that include France, Germany and Japan.

Instead of parodying current affairs, the first episode of “SNL China” made fun of safer topics including the World Cup, pop music and food. The show was hosted by actor Chen He and crosstalk comedian Yue Yunpeng, both established crowd-pleasers, and the guest was pop singer Zhang Jie, who won the International Artist Award at the 2014 American Music Awards.

The person close to the Chinese production team, who watched some of the cut content, told Caixin that his two favorite jokes of the first episode were removed, and they referenced drugs, blind dating, Taiwan and childbirth.

According to Youku, the first episode has been watched nearly 100 million times so far. Alibaba’s thunder has certainly been stolen by its rival, Tencent Holdings Ltd. The latest episode of its talent show, “Produce 101,” was broadcast at the same time as “SNL China and has so far received 300 million views.

Out of the 177 people that rated SNL China on review platform Douban, more than 60% gave the show less than three stars out of five, which is generally considered a poor score. Many commented that the jokes were “dry” and “embarrassing.”

“It is a bit unfair to simply yell at the show,” wrote a Douban user named Nan, who attended the shooting. “Many funny parts that we would like to see have been cut out due to various reasons.”

“It feels bad to watch a filtered show,” Nan commented.