‘Tinder of China’ Gets Some Action in Bond Market 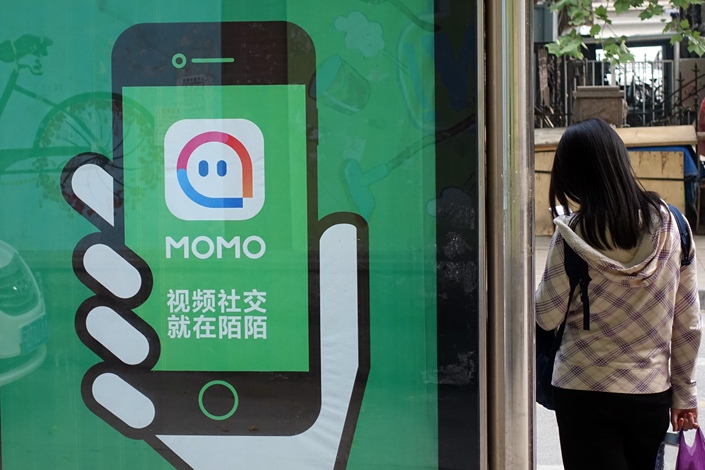 Momo is advertised on a Beijing bus stop in April 2016. Photo: VCG

Momo Inc., operator of a mobile dating app often called the “Tinder of China,” is raising up to $750 million through a convertible bond offering, with plans to use the funds for its February purchase of rival dating app Tantan, the company said.

The offering consists of $650 million in notes that will come due in 2025, with another $100 million available as an overallotment if demand is sufficient, the Nasdaq-listed company said in an announcement on Tuesday. A source with direct knowledge of the plan told Caixin the offering was also expected to price on Tuesday, though no further details were immediately available.

Momo said it plans to use proceeds from the offering to repay a $300 million bank loan it used to partially finance its purchase of Tantan earlier this year. It said it may also use funds to pay down other debt related to the deal, and to develop new services for Tantan. Momo previously said it would pay nearly $800 million for the rival dating app operator in a combination of cash and shares.

Momo is heavily dependent on China’s booming market for livestreaming internet services, and announced its Tantan deal as Beijing was cracking down on that sector in one of its periodic campaigns aimed at stamping out problems like false advertising, pornography and fraud in emerging new media areas. Tantan, which allows users to browse others’ profiles based on their location and sexual orientation, much like Tinder, has grown rapidly since it was founded in 2014.

In addition to supporting Tantan, funds from the new bond offer will be used on various initiatives for Momo’s own platforms, the company said. The offering comes as a wave of new economy Chinese companies is raising billions of dollars through IPOs in Hong Kong and New York. The largest of those to date will see smartphone-maker Xiaomi Corp. raise up to $6 billion through a new listing in Hong Kong next week.