By Huang Rong and Li Rongde 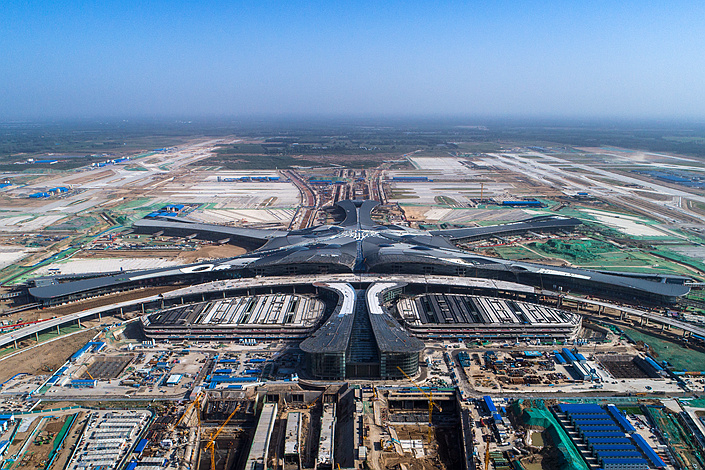 An aerial view of the new airport under construction in Beijing on May 23, 2018. Photo: VCG

China Southern Airlines, one of China’s top three carriers, said it will spend 10 billion yuan ($1.5 billion) to launch a subsidiary in the country’s newest special economic zone to facilitate its “dual-hub” strategy.

China Southern, which claims to be the country’s largest carrier by both fleet size and passenger handling capacity, said that the new subsidiary in the Xiongan New Area in Hebei province will be up and running by the end of this year.

The move comes as the carrier, now headquartered in Guangzhou in the southern province of Guangdong, seeks to establish Beijing as a second hub to bolster its appeal to international air travelers, according to analysts.

“Its strategy of developing two hubs, one in Guangzhou and another in Beijing, could significantly ease pressure on China Southern’s business operations,” Shao said.

China Southern Airlines, which already has a sizable presence in Beijing’s Capital International Airport, broke ground on its hub in Beijing’s second international airport in October. The new airport, under construction on the border of the capital’s southern district of Daxing and Hebei’s Langfang district, is just 60 kilometers (37 miles) from Xiongan and is expected to open in October 2019.

The Xiongan New Area was launched in April last year as a major special economic zone whose significance is on par with that of two other milestone projects in place for decades: the southern city of Shenzhen and Shanghai’s Pudong New Area.

Xiongan was designed as a hub for high-tech research and development and government operations to relieve congestion and pollution in the Chinese capital, according to a blueprint for the new area released by Beijing last year. Several Chinese government agencies will relocate to Xiongan from Beijing once development of the new area is further along.

An express rail line from Beijing to Xiongan is also planned that will allow passengers to travel from the new airport to downtown Beijing in only 11 minutes and from the airport to Xiongan in only 20 minutes.