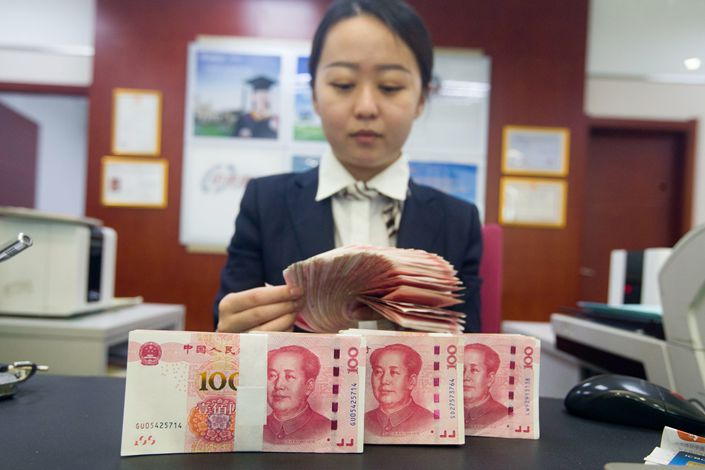 * Banking regulator stipulates that banks will not be required to have a controlling stake in their own AICs, although they should still be major shareholders

(Beijing) — China’s financial regulators have released new rules for entities set up by banks to conduct debt-to-equity swaps, aiming to speed up a program to cut leverage ratios in the heavily indebted corporate sector and reduce lenders’ bad-loan risks.

The regulations, released on Friday and effective immediately, apply to asset investment companies (AICs) — subsidiaries set up by commercial banks that are at the forefront of the government’s swap strategy, but whose operations have been hampered by issues that include the need to set aside large amounts of capital against the possibility of nonrecovery of debt. The “Measures for the Administration of Financial Asset Investment Companies,” published by the China Banking and Insurance Regulatory Commission (CBIRC), will allow the AICs to make lower provisions.

The new rules will allow more flexibility for the AICs and “open possibilities to help lower banks’ capital consumption,” China banking analysts at UBS AG wrote in a note on Monday. “The regulation allows banks to hold non-controlling stakes in AICs, meaning banks can avoid capital consumption by being a minority shareholder,” and will also allow swap projects financed through off-balance-sheet funding to avoid setting aside capital buffers, they wrote.

“Such measures to increase banks’ capital efficiency may help remove a key hindrance behind the current slow progress” of debt-for-equity swaps, they wrote.

The government has made debt-for-equity swaps a key part of its deleveraging agenda, breathing new life into a program that started in the late 1990s when four large state-owned asset management companies were set up to dispose of trillions of yuan of bad debts on the books of the big state-owned commercial banks.

Premier Li Keqiang said in his annual work report to the National People’s Congress in March 2016 that market-driven swaps could be used to bring down corporate leverage ratios, especially in state-owned enterprises. And in October of that year, the State Council, China’s cabinet, announced more details of the plan that would allow companies to give equity stakes to lenders in return for debt forgiveness.

All of the major state-owned banks announced plans to set up their own asset management subsidiaries in 2016, but it wasn’t until July 2017 that regulators started to give approval for such units.

By the end of last year, 102 companies had signed debt-to-equity swap deals valued at 1.6 trillion yuan ($242 billion) with various institutions. However, only 300 billion yuan of swaps involving around 20 companies were implemented, according to data from the National Development and Reform Commission.

Progress has been slow for a number of reasons, including a lack of investor confidence in the profitability of the program, which has made fundraising difficult; and the complicated and protracted negotiations between the creditor banks and potential investors in the debt such as the AICs and other financial institutions.

In January, in an effort to broaden sources of financing, regulators gave banks the go-ahead to tap the public for funds.

Banks were also reluctant to allow AICs to take on debt from companies that wanted to take part in the program because of the size of the provisioning they would be required to make.

The new rules released last week should, in theory, make the program more attractive to the banks. They stipulate that banks will not be required to have a controlling stake in their own AICs, although they should still be major shareholders. In addition, the regulations allow the AICs to restructure or sell debt that cannot be turned into equity, and banks will be allowed to use the proceeds from the sale of wealth management products to invest in the debt-for-equity swaps of other lenders.

AICs are being encouraged to buy creditors’ rights in troubled companies from the banks at a discount to their face value and then turn those rights into an equity stake. This process is intended to guide banks, AICs, the troubled companies and current shareholders to “build up a reasonable mechanism to share losses in accordance with the law,” an unnamed CBIRC official said in a statement released along with the rules.

The regulations also allow the AICs to continue to invest in debtors’ equity first so that the companies can use the proceeds to pay back their debts. The “equity first, debt payoff to follow” model, which has been criticized for allowing banks to hide debt under the guise of equity, has been a popular form of swap. It saves the debtor from having to negotiate with multiple creditor banks and does not involve working out the discount rate on the debt, which is usually controversial and time-consuming.

But in a sign the CBIRC is wary of new risks that may arise from the implementation of the swaps program, the rules ban banks from signing repurchase agreements when transferring debt to “prevent fake transactions that attempt to hide bad assets.” They also prohibit swaps to be conducted for dishonest companies, financial institutions, and “zombie companies” –– money-losing, debt-laden enterprises with no viable prospects.

The government is also promoting the debt-to-equity initiative in other ways. When the People’s Bank of China announced a week ago that it was releasing a total of 700 billion yuan in liquidity by cutting banks’ reserve requirement ratio (RRR), it stipulated that around 500 billion yuan of the total should be used by the five state-owned banks and 12 national joint-stock commercial lenders to support debt-for-equity swaps.

The reduction in the reserve requirement ratio and the publication of AIC rules will likely accelerate debt-for-equity swaps because they offer concrete guidelines on how the program should be properly carried out, some analysts said.

“The announcement of the targeted RRR cut and the introduction of the new administration measures have brought clarity to the way the debt-for-equity swaps can be executed, particularly in terms of the source of funds,” Zhong Zhengsheng, director of macroeconomic analysis with consultancy CEBM Group, a subsidiary of Caixin Insight Group, said in a report published Monday.

Analysts with UBS said the new rules show the government is “keen on promoting” debt-for-equity swaps.

However, “given the commercial-based principle and banks’ exposure to downside risks of equity/preference share, it is uncertain whether banks would be incentivized to accelerate the progress materially,” they said.