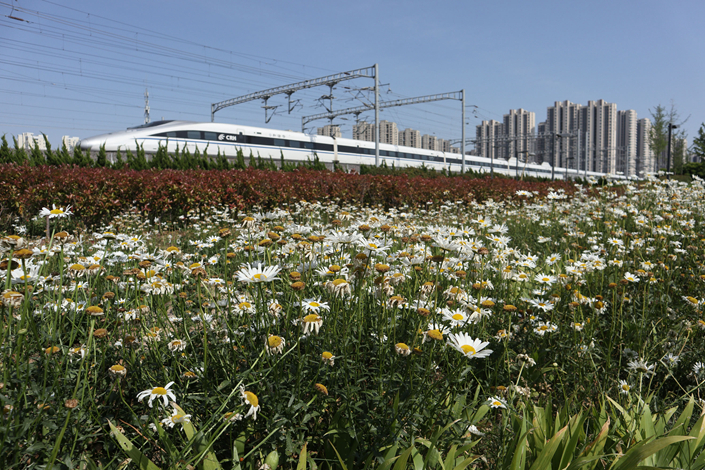 A bullet train travels past a park in Qingdao, Shandong province on June 3. Photo: VCG

China Railway Group Ltd., Asia’s biggest railroad-builder by revenue, has received funding through a government-initiated debt-for-equity program, a move it said would reduce its leverage and further China’s Belt and Road Initiative.

The company said in a filing (link in Chinese) to the Shanghai Stock Exchange on Thursday that nine investors are involved in the swap, which is worth 11.6 billion yuan ($1.8 billion).

China has championed debt-for-equity swaps, introduced in 2016, as a way to help state-owned firms, especially those in the coal, steel and infrastructure sectors, survive cyclical downturns when they face a supply glut.

The plan transforms bank lenders into equity investors in the troubled businesses which they have financed, but some analysts have criticized the arrangement for allowing companies to escape their debts too easily.

China Railway said Thursday’s deal will enhance its competitiveness and operations. The company also noted that the deal will “help lift China’s international image through its active involvement in the Belt and Road.”

The builder expects the investments will lower its asset-to-liability ratio by 1.4 percentage points to 78.5%, resulting in a saving of 580 million yuan in annual interest costs.

Infrastructure companies usually have a higher asset-to-liability ratio than other firms because the sector typically has a lower profit margin and is more capital-intensive and dependent on financing. It also has a longer investment payback period, China Railway said.