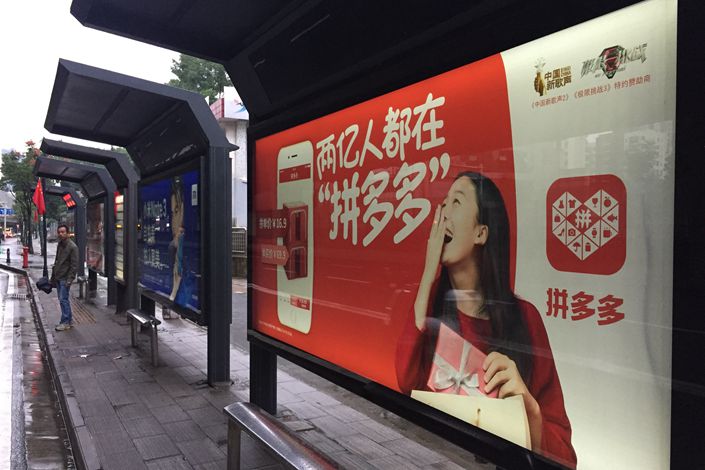 The Tencent-backed group-buying site Pinduoduo has applied for an initial public offering (IPO) with the U.S. securities regulator, aiming to raise up to $1 billion as the startup strives to eat into the market dominated by Alibaba and JD.com.

Pinduoduo’s registered unit, Walnut Street Group Holding Ltd., filed the application on Saturday, but without disclosing the number of shares it will offer, their price range, and the bourse that will debut the shares.

Pinduoduo, which went from formation to a planned flotation in only three years, is one of the fastest-growing companies in China’s thriving online shopping industry. In comparison, it took online make-up seller Jumei International Holding Ltd. four years before going public in New York in 2014.

Pinduoduo is noted for its “group purchase” model that encourages buyers of groceries, electronic devices and other goods to invite their friends to join in the shopping spree for a discount. It boasts annual active buyers of 295 million by the end of the first quarter, nearing JD.com Inc.’s 302 million during the same period.

However, its fast rise to fame has been tainted with claims that some products are fakes or substandard, which worries some market observers over its reputation and financial sustainability.

Jumei, which has been constantly accused of selling counterfeits, saw its shares dive to $2.58 at its Friday close, a plunge of 88% from its IPO price.

Pinduoduo spent $194 million on sales and marketing in the first quarter, accounting for 92% of its operating cost. Its operating loss widened 17% to $40 million, resulting from heavy spending on advertising such as TV commercials and show sponsorships.

The company said it will use the IPO proceeds for business expansion, research and development, and potential strategic investments and acquisitions, although it has “not identified any specific investments or acquisition opportunities at this time.”

Bargain lovers started to flood to Pinduoduo in 2017 to place their orders, with an average order cost of slightly less than 40 yuan ($6), according to the prospectus. Now, Alibaba Group Holding Ltd. and JD.com have also debuted similar group-buying feature to cash in on the fad.

“Pinduoduo is not a conventional company,” founder Huang Zheng, a former Google engineer, said in a letter to shareholders. “We founded Pinduoduo when the China market accepted the status quo of the existing e-commerce landscape and thought its formative phase had come to an end.”

Pinduoduo, however, warned in the application that its limited operating history makes it difficult to evaluate its business and prospects. “We cannot guarantee that we will be able to maintain the growth rate that we have experienced to date,” it said.