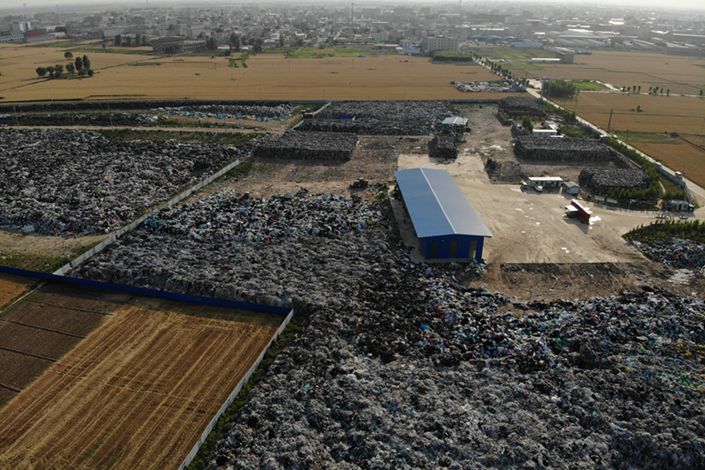 A landfill the size of 14 soccer fields sits next to a road that runs through Anxin county in Xiongan New Area. Photo: Zhou Chen/Caixin

The once-dark and smelly water in a pond in Donghegang village, in the northern province of Hebei, has become noticeably clearer after a cleanup that took several months and cost at least 100,000 yuan ($15,100).

Small fish can even be spotted in the water, an auspicious sign of improvement in the environment of this small rural community, according to an engineer who led the pond’s cleanup operations. “But we cannot drop our guard because household wastewater continues flowing into the pond through the outfall below,” the engineer said while pointing to a darker patch of water on an edge of the pond.

Like many rural communities in China, the small village in Hebei’s Xiongxian county relies on such ponds to hold wastewater from households and industrial plants due to the absence of a proper sewage system.

Hundreds of such wastewater ponds, both natural and man-made, are hampering an ambitious plan by Beijing to turn Xiongxian and two bordering counties into a new special economic zone known as the Xiongan New Area. Air pollution and an undeveloped waste-disposal system also are contributing to the problem.

Xiongan New Area, about 100 kilometers (60 miles) south of Beijing, is being built into an advanced research-and-development hub with outstanding infrastructure and public services so that it can help relieve the Chinese capital of urban stress, according to a central government blueprint. The new economic zone should also play an active role in developing the new major metropolitan area in North China that will consist of Beijing, Hebei and the city of Tianjin.

But for now, the area, consisting of numerous rural communities in the three largely underdeveloped counties in Hebei, is plagued by severe water and air pollution and encroachment of unsorted waste due to decades of negligence and the absence of a basic sewage and solid-waste disposal system, according to professor Liu Jianguo with Tsinghua University’s School of Environment.

“People might have been thinking that development of Xiongan New Area is like drawing on a piece of blank paper, but the area is no longer as clean as a blank sheet of paper,” he said.

Hundreds of wastewater ponds, some as old as 30 years and scattered throughout the new special economic zone, have not only scarred the landscape but also pose a health hazard, the Chinese Academy of Environmental Sciences warned in a recent feasibility study on pollution-fighting operations in Xiongan.

A cutting-edge microbiological coating developed by Chinese scientists is credited in the successful treatment of wastewater in Donghegang village in Xiongxian over the past several months. But it has already cost the county government over 100,000 yuan. Few sewage systems have been built in Xiongan New Area’s rural communities, meaning that much more money is needed to build such facilities and fund cleanup projects at existing ponds, according to the head engineer, who asked not to be named.

Solid waste, particularly from thousands of underregulated small businesses, poses no less a challenge to development of the new economic zone.

Rural households are much better off economically, but awareness over environmental protection remains appallingly low, according to Xie Jingrong, a vice chairman of the All-China Federation of Industry and Commerce, a nongovernmental organization that bridges the government to private entrepreneurs. As a result of the lack of awareness, wastewater is allowed to flow everywhere, and used plastic bags are seen flying all over the place, said Xie, who said he had been to 150 villages in 20 Chinese provincial-level areas.

Meanwhile, Anxin county, the third county that is part of the Xiongan New Area, has for decades been known as the largest shoemaking hub in North China. Shoemaking factories in Anxin, mostly small and unlicensed, churned out 20 billion yuan worth of shoes each year while they also emitted tons of toxic air and piles of hazardous waste. As a result, the county has been left with a gigantic waste dump of leather and rubber waste in an area the size of 14 soccer fields.

Even after the launch of the special economic zone, local villagers in Xiongan continued to dump solid waste into ponds or makeshift landfills that are built without anti-contamination film underneath to prevent toxic liquid from seeping deep into the soil and water table, according to locals with whom Caixin has spoken.

A local villager in the town of Santai in Anxin county told Caixin that fires break out from time to time at the unlicensed landfill near his home, which he initially believed were set by mischievous children. It turns out that the fires were lit by factory workers to conceal their illicit transportation of industrial waste there, the villager said.

“I have called police five times this year over such deliberate fires,” he said.

After the government started to clamp down on makeshift landfills, the licensed sites became overwhelmed by a sharp increase in the amount of waste they receive each day, according to Feng Tianlun, who manages the only licensed landfill in Xiongxian county. Daily intake of solid waste spiked from 247 tons a day last year to more than 620 tons a day on average in the first five months of this year, meaning the site will be filled very soon, Feng said.

The other two counties in the Xiongan New Area are in no better position to deal with challenges associated with waste disposal as existing landfills would have to be relocated to make way for developing part of the downtown area for the new special economic zone, according to a government blueprint for the special economic zone released last year.

Both the central and provincial governments have yet to announce major spending on development of the special economic zone and how much of it will be allocated for environmental cleanups. The Ministry of Ecology and Environment last year said it had earmarked 500 million yuan for the new area, but it appears that will be only a fraction of what’s needed, as the fight against pollution in Xiongan will be a protracted war, according to several analysts with whom Caixin has spoken.

Cleanup operations in Xiongan could create businesses worth at least 100 billion yuan, according to a study by Everbright Securities Co. Ltd.

China Xiongan Construction and Investment Co. Ltd., a government-backed company tasked with developing the new area, has sought to bring on board big state-owned and private companies via so-called public-private partnerships, or PPPs.

Many private businesses that invested in Xiongan cleanup projects said that they have indeed gained exposure via such PPP projects, but the trade-off is that they have suffered heavy losses due to a lack of financial support from the government.

A subsidiary of Tus-Sound Environmental Resources Co. Ltd. was contracted by the Anxin county government to dispose of solid waste, according to Li Junhui, the general manager of the subsidiary company. The county government already owes his company 10 million yuan, he said. Li said that he was not particularly worried about risks linked to the partnership with the local government in the short term, but their investment can be sustained only when they are matched with government goodwill and guarantees through law and regulations.

Some 12,000 small and unlicensed industrial plants within the Xiongan New Area have been ordered to close for environmental violations or have been suspended as required in accordance with a government plan released by Hebei provincial government in August.

However, Wang Jian, a vice director of the Rongcheng County Bureau of Environmental Protection, admitted that their resources are spread too thin to prevent a comeback of the illicit businesses.

“The returns for unlicensed businesses are higher than they are for legitimate businesses, and closure does not cost them much under the law, meaning more illicit businesses might be actually willing to take the risk to tap into the rising demand spurred by the clampdown,” he said.

Wang Liang, a resident in Xiongxian County’s Shilipu village, and several friends owned a small factory that manufactured plastic pipes. They used to make several hundred yuan a day. But Wang, in his early 30s, has been out of a job since their plant was torn down a few months ago.

Four-fifths of the small businesses like theirs, which operate out of backyards or on small plots of leased land, do not qualify for a business license over failure to meet environmental-protection requirements. Businesses that operate without a license do not get compensated after a government-ordered closure.

“When the plan to develop the Xiongan New Area was announced, we felt elated because we thought we could be rewarded with a lot of compensation in redevelopment like many evictees elsewhere,” he said. “Now we feel lost.”

Many other unemployed people of the same age have not figured out what they will do next, he said.