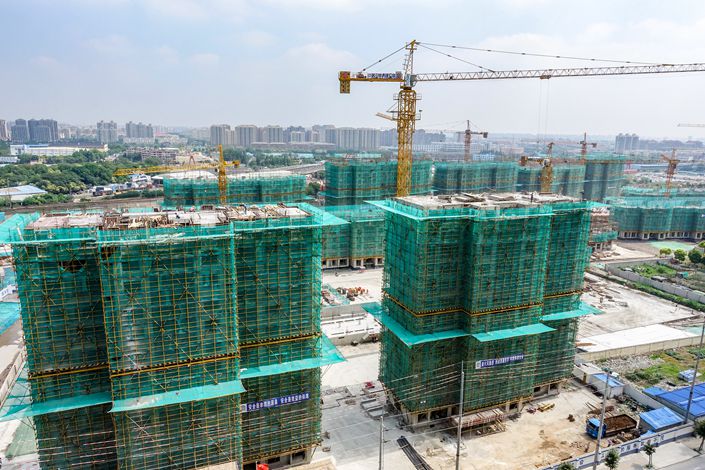 Apartment blocks are built in Shanghai on June 7. Photo: VCG

Land sales in smaller Chinese cities are surging, outpacing their big brothers such as Beijing and Shanghai, as local governments try to increase their revenue and less draconian property curbs attract developers.

A monthly private survey found 36 second-tier cities raked in more than 1 trillion yuan ($150.5 billion) in total from selling land in the January-June period, up 33% from a year earlier, with the area of land sold rising by 31%. Land sales revenue in 260 third- and fourth-tier cities jumped by 43% year-on-year to 753.8 billion yuan in the same period, while sales by area increased 25%, according to a report (link in Chinese) by the China Index Academy, an affiliate of New York-listed Fang Holdings Ltd., formerly known as SouFun Holdings Ltd.

In contrast, the four first-tier cities — Beijing, Shanghai, Guangzhou and Shenzhen –– raised a combined 183.7 billion yuan, down 23% year-on-year, although the amount of land sold rose 3%.

Overall, growth in the value of land sales in the 300 cities in the survey slowed to 28% in the first half of the year from 37% in the same period last year, bringing in 1.96 trillion yuan to local government coffers.

The divergence between large and smaller cities reflects different government controls over the real estate sector, and the prosperous property markets in lower-tier cities supported by loans from policy banks, which are issued primarily for shantytown redevelopment.

As the four largest cities have imposed increasingly stringent restrictions on land sales as part of a nationwide campaign to curb speculation, developers are taking a cautious approach to land purchases in these cities, while they are more enthusiastic about buying land in lower-tier cities, the report said.

But the boom in smaller cities may not last as the government tightens control over its shantytown redevelopment program, a major driver of demand.

Property managers and analysts point out that the hot property markets in most third- and fourth-tier cities have been mainly supported by loans earmarked for shantytown renovation.

In 2015, the central government began encouraging local authorities to pay financial compensation to residents displaced by redevelopment as an alternative or supplement to offering them new homes. Consequently, monetary compensation jumped sharply to more than 50% of all redevelopment compensation in 2017 from just 9% in 2014, and has helped push up housing prices in lower-tier cities where a lot of shantytown redevelopment is taking place.

The majority of the funding has come from loans provided by policy banks such as the China Development Bank (CDB). The CDB’s outstanding shantytown redevelopment loans rose 37.6% last year to 2.93 trillion yuan, according to its annual reports.

Caixin has learned that the CDB has tightened the approval process for credit for shantytown redevelopment and the bank’s headquarters has taken back control for such lending from its branches.

The Index Academy said that real-estate demand and sales in the third- and fourth-tier cities in its survey will probably drop in the second half of the year as the central government tries to lower the proportion of cash handed out as compensation for homeowners displaced by shantytown redevelopment.