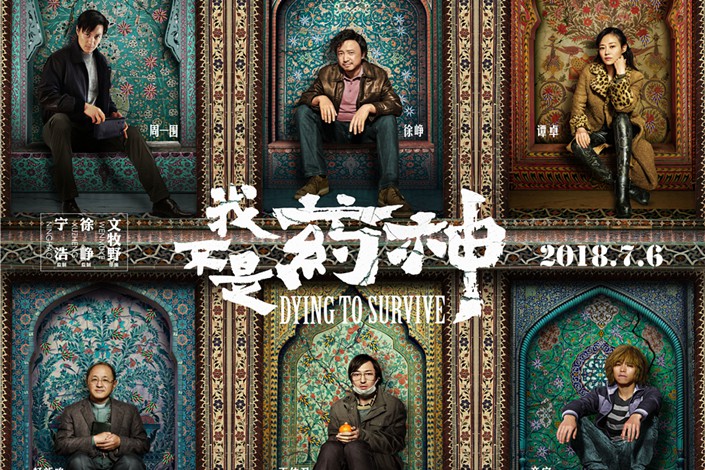 The movie “Dying to Survive” premiered on Thursday in China. Photo: VCG

(Beijing) — China’s most-discussed film, inspired by the real-life battle leukemia patients went through to access an expensive drug, has surprised observers with its portrayal of social problems amid the strict regulatory environment.

“Dying to Survive” tells a story of unsuccessful merchant Cheng Yong, who is asked by a leukemia patient to smuggle cheap generic drugs from India to China, breaking Chinese law. Cheng eventually builds a complete underground supply network, providing the drugs to many patients unable to afford the licensed versions in China and drawing the attention of police.

The case of this generic medicine, banned in China but proven effective, highlights a legal and moral dilemma between market compliance and saving lives. In the film, the developer of the original drug demands the police crackdown on smuggling, and in the end, Cheng is imprisoned, but with a reduced sentence.

The movie debuted Thursday and is expected by box office tracker Maoyan to bring in 2.8 billion yuan ($422 million), even more than “Avengers: Infinity War,” the highest grossing foreign movie in China this year. This projection is based on the film’s performance during its sneak-peek screening that started Saturday and helped the production team earn more than 100 million yuan already.

Shares of the movie’s Shenzhen-listed distributor, Beijing Jingxi Culture & Tourism Co. Ltd., surged to 14.52 yuan on Thursday, up by 40% from Friday’s trading close. Its stock enjoyed gains of 10%, the daily limit in China, for each of the past two days.

Film regulators usually demand movies depict a harmonious China marked by “positive energy.” Getting the green light to release the movie was “extremely hard” as the producers had to remove some parts of the film, according to movie industry analyst Wu Jian.

“As the story involved sensitive issues in the country, including the government, police and health care system, it will be almost impossible to release the movie in the U.S. and Europe as the regulator is worried that China’s situation might be misinterpreted,” Wu said.

“It can hardly be believed that the film was made in the current moviemaking environment in China,” said Yin Hong, professor of film and television studies at Tsinghua University, who said that the movie is both realistic and idealistic, and has a strong conscience.

“Dying to Survive” is based on the real story of Chinese leukemia patient Lu Yong, who smuggled cheap, life-saving generic medicines to China for himself and other patients.

Lu was diagnosed with leukemia in 2002 and treated with Glivec, a patented drug made by Swiss multinational Novartis International AG. The cost then was 23,500 yuan a month, more than three times the average annual income of a Chinese urbanite at the time. The drug was not covered by the government-backed health insurance program.

Lu later discovered the Indian generic version would cost only 200 yuan a month if he bought it in bulk. In 2013, he was arrested for running a counterfeit drug scam and credit card fraud. He was released on bail in 2014.

Some 300 fellow patients then petitioned the courts to dismiss his case. In 2015, the procuratorate — a government entity similar to a public prosecutor — in Yuanjiang, Hunan province, that handled the case, decided not to prosecute Lu.

China’s national medical insurance started to cover Glivec in 2017, which cost only 2,000 yuan per month after reimbursement. At the end of the film, which portrays this development, a character praises this progress.

Lu wrote in his personal blog that his wish to speak a few words on camera at the end of the film was rejected because an official from the film regulator said that the movie should “highlight the government’s role and de-emphasize individual heroism.”

But both the incident and the film have aroused discussion over Lu’s controversial deeds. “Generic drugs will help the poor. But could fewer protections for pharmaceutical patents hamper innovation in the industry?” Chen Zuobing, vice president of Zhejiang University Hospital and the director of Kangfu Medical Center at the Peking University Third Hospital, wrote in an opinion piece for Caixin.