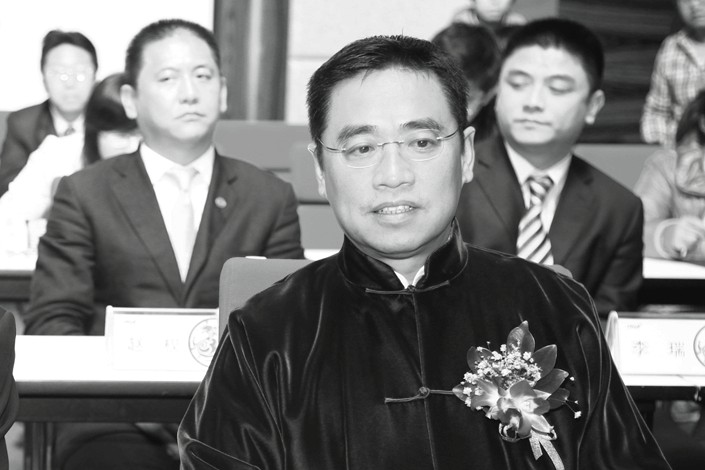 HNA didn’t provide further details. A source close to Wang told Caixin that he fell more than 10 meters (32.8 feet) off a wall while taking pictures during a visit to Avignon in Provence, an area popular with tourists. Local police said Wang’s fall was likely an accident, Reuters reported.

HNA Co-Chairman Chen Feng is on his way to France, and other executives have rushed back to the company’s headquarters in Haikou, Hainan province, Caixin has learned.

Wang, 57, along with Chen, has led HNA’s rapid expansion since it was set up in 1999 as a small regional carrier. Wang is seen as the architect of HNA’s high-flying acquisitions over the past few years, snapping up billions of dollars of global assets, including stakes in Hilton Worldwide and Deutsche Bank. His death may complicate HNA’s efforts to restructure assets and pay off debts after years of reckless spending.

Hong Kong-listed CWT, a Singaporean commodities and logistics group acquired by HNA in late 2017, fell as much as 7.4% during the day before closing down 5.6%. Other HNA units traded in Hong Kong tumbled as much as 2.2%, with the exception of Tianjin Tianhai Investment Co., which rebounded to close up almost 0.7% after slumping nearly 2% in the morning.

Most of HNA’s Shenzhen and Shanghai-listed subsidiaries have been suspended since late last year amid the company’s efforts to restructure assets for debt relief. Three mainland-listed units that are still trading lost between 1% and 4.3% during the day.

HNA’s bonds largely remained stable. One bond issued by HNA Group International dropped the most on the news, more than 1.3%. The bond, issued in August 2016 to raise $1 billion, is held by investors including UBS and Fidelity International. HNA and subsidiaries currently have 77 outstanding corporate bonds with payment obligations of 121 billion yuan ($18.24 billion), according to Bloomberg data.

The source close to Wang said he was visiting France on a business trip and took a break to visit Avignon. Wang was unconsciousness after falling from the wall. He regained consciousness while being treated at a hospital and said only that his feet hurt, according to the source.

Another friend of Wang’s who dined with him a month ago told Caixin that Wang said during the meal that he had been having heart problems and that his blood pressure had been unstable.

“Wang Jian had a hereditary heart disease, and he had undergone heart surgery before,” the source told Caixin. “He had been under great pressure recently.”

One of China’s most acquisitive companies, HNA has been under heavy financial and regulatory pressure since last year because of its heavy debt load. The government has moved to rein in risks to the financial system created by such debt-ridden companies while cracking down on acquisitions in areas like travel, leisure and entertainment that were seen as frivolous.

Other companies caught in the crackdown include energy conglomerate CEFC China Energy, insurance giant Anbang Insurance Group and real estate and entertainment company Wanda Group. Many of the companies also came under scrutiny for their opaque ownership structures.

This year, HNA embarked on a major selling spree to pay down its debt, including divestiture of its Hilton stake purchased just two years earlier. Last year, the company also took the unusual step of disclosing its shareholding structure.

According to HNA documents, Wang and Chen each held around 15% in HNA as the biggest individual shareholders. The company is also 30% owned by a New York-based foundation and 23% controlled by a China-based charity.

HNA’s individual shareholders have promised to give their stakes to the New York charity fund in case of leaving the company or death, according to the document.