Importers Told to Look to Belt and Road 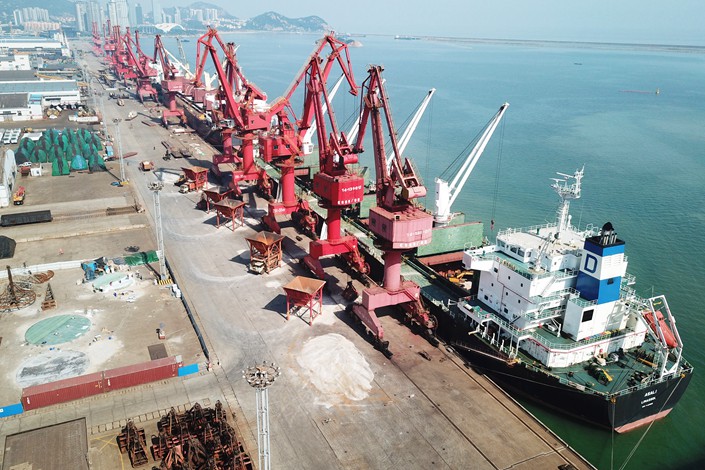 Cargo ships prepare to be loaded with containers at the Port of Lianyungang in Jiangsu province on June 8. Photo: IC

The Chinese government’s top decision-making body has told companies to seek imports among countries involved in the Belt and Road Initiative as trade tensions escalate with the U.S.

Late Monday, the State Council, the nation’s cabinet, issued guidelines that called for China to “improve its import structure to promote the upgrading of production and consumption” and reduce tariffs and unnecessary charges (link in Chinese) on some products.

Hours later, the Ministry of Commerce said in a separate statement that it will encourage firms to increase purchases (link in Chinese) of soybeans, soybean meal, seafood and cars from countries other than the U.S.

Companies should “look to Belt and Road countries as a new source of imports, strengthen strategic cooperation, and increase imports of high-quality products that meet the needs of upgraded domestic consumption in order to expand the scale of trade,” according to the State Council notice.

From January to May, China imported 1.1 trillion yuan in goods from countries involved in the Belt and Road Initiative, an increase of 15.1% year-on-year, and 3.4 percentage points higher than the overall growth rate of imports, according to a representative from the foreign trade department of the Commerce Ministry in a statement (link in Chinese) released on Tuesday.

“We will implement measures to reduce the import tax rate of some goods, cut out middlemen, get rid of unreasonable price increases and improve people’s living standards,” the notice said.

China also aims to increase imports of agriculture products by speeding up the signing of customs agreements with other countries, the document said.

On July 1, China eliminated the 3% tariffs on soybean imports from India, South Korea, Bangladesh, Laos and Sri Lanka. Authorities also reduced tariffs on chemicals, medical supplies, clothing, steel and aluminium products, as well as other agricultural products from the five countries under amendments to the Asia-Pacific Trade Agreement.

China said it will still promote the role of foreign investment in expanding imports, saying it will “actively guide foreign investment in strategic emerging industries, high-tech industries, energy conservation and environmental protection sectors, and improve the role of foreign capital in the introduction of advanced technology and management expertise,” the State Council notice said.

The first shot of the U.S.-China trade war was officially fired when the U.S. levied additional tariffs of 25% on about $34 billion worth of Chinese imports on Friday. China immediately hit back with retaliatory tariffs, according to the official Xinhua News Agency.

China has been the world’s largest exporter of goods and the second-largest importer for nine consecutive years.