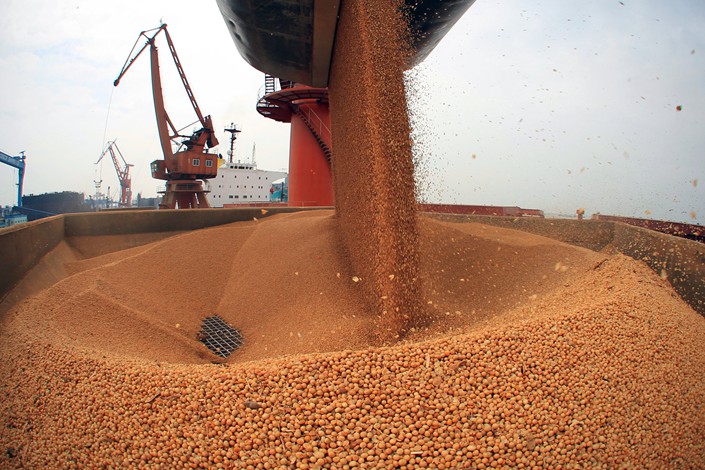 Soybean oil made from U.S. soybeans goes down a production line at a factory in East China’s Shandong province on Wednesday. Photo: VCG

* Crop was among the $34 billion of U.S. imports that Beijing hit with retaliatory tariffs on Friday

* Tariff appears to take aim at the U.S. Midwest’s soybean-producing states, considered a base of U.S. President Donald Trump’s support

(Beijing) — The long-threatened trade war between the U.S. and China finally became reality on Friday, with Beijing imposing a 25% tariff on U.S. soybean imports — a move likely to cause both countries pain.

Soybeans, seen by many as emblematic of the mutual destructiveness of the trade war, were among the $34 billion of U.S. imports hit with tariffs on Friday as Beijing responded to U.S. tariffs on an equivalent value of Chinese imports the same day.

Soybeans are the U.S.’ most valuable agricultural export to China, with a third, or $15 billion worth, of U.S. domestic production heading to the country. The trade is also vital to China, the world’s largest soybean importer, which uses the commodity mainly by pressing it into oil and as pig feed. It also forms an important part of the national diet through products such as tofu and soy sauce. Because China has one-fifth of the world’s population but only one-tenth of its farmland, its agricultural imports are crucial.

China has an outsize influence in soybean production. A study conducted by Purdue University for the U.S. Soybean Export Council found that a Chinese import tariff on U.S. soybeans of 10% would lead to U.S. soybean exports falling by 18%. The tariff appears to take aim at the U.S. Midwest’s soybean-producing states, considered the base of U.S. President Donald Trump’s support, as November midterm elections approach.

Yet the tariff will also be damaging to China, said Even Pay, a senior agriculture analyst with Beijing-based advisory firm China Policy. “In the short term, China is likely to look to make up for soy imports from anyone willing to sell, with Brazil, already the world’s largest soybean producer, likely to benefit. But China’s big farms are much more dependent on bulk commodity feeds than many realize. Yet Brazil can’t export enough to meet their needs, and they can’t easily make up the lost feed with scraps from elsewhere.”

The tariffs are nevertheless a boost for Brazil, which appears to be buying U.S. soybeans at cut prices while exporting its own produce at higher rates. Last month, China’s Ministry of Finance announced that it will remove tariffs on soybeans from five countries, including India and Bangladesh. But because these countries are not major soybean producers, the move was largely symbolic, Pay said.

“However, there is a lot of chatter in Chinese media and policy circles about reducing China’s dependence on a few suppliers such as the U.S. by boosting agriculture projects among countries participating in the Belt and Road Initiative,” Pay said, referring to China’s major infrastructure development push. “Long term, the soybean tariff will help garner support for Belt and Road projects.”

China is ramping up its own domestic soybean production, which is expected to rise almost 5% in 2018, according to the Ministry of Agriculture and Rural Affairs. Provinces in the country’s northeast have urged farmers to plant more this year. However, this may prove difficult as farmers choose more-profitable crops like corn, according to Zhang Jinjie, a soybean futures analyst with Shandong-province-based consulting firm Sublime China Information. And Brazil does not export enough soybeans to meet China’s demand on its own.

The impact of a soybean tariff will also spill over to Chinese businesses and consumers, said Cheng Guoqiang, a professor at Tongji University in Shanghai. “Many domestic businesses are worried and have to look for new suppliers,” Cheng said.