Wintime Group Seeks to Raise $6 Billion After Wave of Defaults 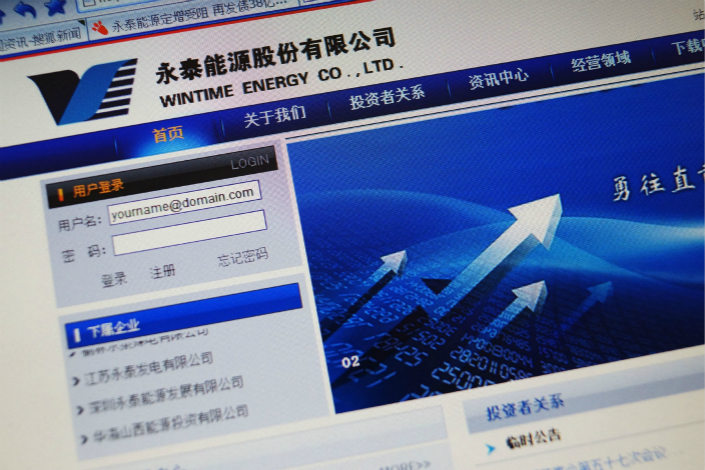 A ratings agency has downgraded Wintime Energy’s credit and bond ratings to CC, which means the company can’t guarantee it will repay its debts even if it undergoes bankruptcy or restructuring. Photo: IC

A private Chinese company and its energy unit are seeking to raise nearly 39 billion yuan ($5.89 billion) through asset sales and debt-for-equity swaps after the latter defaulted last week.

The efforts of Wintime Group Co. Ltd. and its subsidiary illustrate the scramble to raise money that takes place after a debt-laden company loses access to financing and goes into default. Wintime Group’s financial problems come as a growing number of Chinese companies have defaulted on bonds as the government increases scrutiny on corporate debt amid a national deleveraging campaign.

To deal with the debts, Wintime Group has set up a team to speed up the sale of 15 billion yuan in assets, eyeing state-owned enterprises (SOEs) as prospective buyers, according to sources close to the company. The company is also considering taking out bank loans and conducting debt-for-equity swaps.

Its subsidiary, Wintime Energy Co. Ltd. plans to swap 24 billion yuan in liabilities for equity, the sources said, and its parent plans to issue convertible bonds to boost its cash flow.

Wintime Energy, which specializes in the coal and oil sectors, missed principal and interest payments on 1.5 billion yuan worth of commercial paper, a type of short-term debt issued by corporations, that matured on Thursday, according to a statement from Shanghai Clearing House Co.

The same day as the default, Wintime Energy called off a new issuance of commercial paper after it got the cold shoulder from investors, Tian Ying, chairman of Huachen Energy Co. Ltd., a subsidiary of Wintime Energy, said during a conference call on Friday. The company had sought to raise up to 1 billion yuan to refinance its debts.

The initial default triggered defaults on 13 of Wintime Energy’s short-term bonds and fixed-income products worth 7.4 billion yuan, according to Caixin calculations and a report by China Lianhe Credit Rating Co. Ltd., a Chinese credit ratings firm.

Since 2017, all of Wintime Energy’s bond contracts have contained a cross-default clause to protect investors. The clause stipulates that once the company defaults on any one of its bonds, it defaults on all of them.

Wintime Energy’s total debt reached 78.23 billion yuan by the end of March, with its debt-to-asset ratio hitting 72.95%, according to a company financial statement.

Corporate borrowers have missed payments on 24 domestic bonds this year, according to data compiled by Hithink Royalflush Info. There were about 66.3 billion yuan of bonds in default at the end of May, or 0.39% of total outstanding corporate bonds, according to the People’s Bank of China, the country’s central bank.

Since the default, Lianhe has downgraded Wintime Energy’s corporate credit rating and corporate bond rating to CC from AA+. A CC rating means that the company can’t guarantee that it will repay its debts even if it undergoes bankruptcy or restructuring.

At a news conference last week, Wintime Group Chairman Wang Guangxi said that he will not run off because of the debt crisis.

He said that Wintime Group had raised 12 billion yuan by selling five maternity hospitals to a state-run enterprise, and Wintime Energy will set up a committee to handle the debt-for-equity swap, though it had yet to appoint any members or a chairman.

The China Banking and Insurance Regulatory Commission will take the lead on forming the committee, Wang said.

Wintime Group has reached agreements with five banks that have promised to continue providing liquidity to the parent company, Wang said.

China Citic Bank International Ltd., one of the five banks, has agreed to extend Wintime Energy 5 billion yuan in loans, 1.5 billion yuan of which have been allocated to refinance the defaulted commercial paper, Tian said.

Some traders noted that Wintime Energy didn’t tap the 1.5 billion yuan to cover the principal and interest payments of its commercial paper due on Thursday.

Wang denied this, saying that the bank loans were used to keep the company afloat.