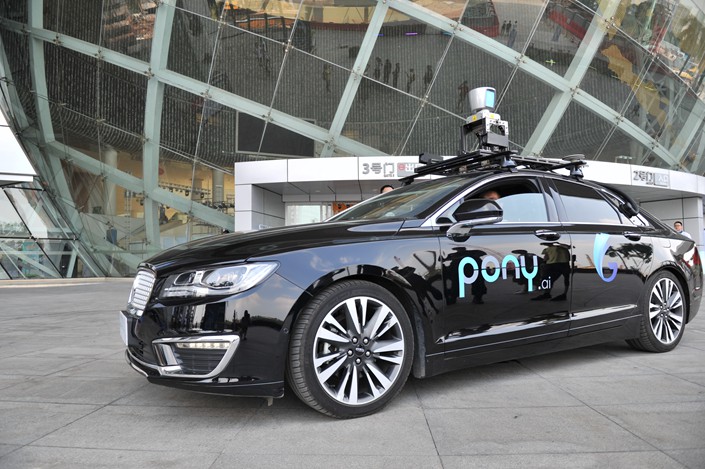 A self-driving Pony.ai car is displayed during an exhibition in Guangzhou, Guangdong province, on May 19. Photo: IC

Pony.ai, a self-driving startup founded by veterans of Baidu Inc. and Google Inc., announced it has secured a total of $214 million in funding within six months.

The company, which is less than 2 years old, has obtained $102 million in its second round of funding, it said in a statement Wednesday. This followed its first funding round in January, in which it raised $112 million.

The new capital will be used to expand the company’s fleet of autonomous vehicles and its headcount, as well as accelerate its drive to take its technology to market, the statement said.

Pony.ai said the latest round was co-led by ClearVue Partners and Eight Roads Ventures, with existing backers Silicon Valley-based Sequoia Capital and China’s Morningside Venture Capital upping their stake in the startup.

“This infusion of capital reflects a growing interest from both a new and existing investor group. It also serves as another testament to investors’ conviction in Pony.ai’s team, technology, and path towards commercialization,” the statement said.

Set up in late 2016, Pony.ai was co-founded by two executives from Baidu. CEO James Peng is an ex-employee of what is now Google LLC, and later joined Baidu to oversee the technical direction of autonomous driving and big data. Chief Technology Officer Lou Tiancheng previously worked on self-driving products at Baidu and Waymo, the self-driving arm of Google parent Alphabet Inc.

Pony.ai is based in Fremont, California, and in Guangzhou, with a research and development center in Beijing, according to a news statement.

As it races to catch up with the U.S. in the self-driving car sector, China created its first national regulations on public-road tests of such vehicles in May, allowing local governments to approve and issue road-test car plates, according to the official English-language newspaper China Daily. Beijing and Shanghai had already issued local regulations on road tests.

The national rules stipulate that test applicants must be independent legal entities registered in the country, and must complete tests in designated closed zones before the vehicles hit the country’s roads.

A number of Chinese startups have accelerated their efforts to tap into the market, which is expected to be worth $7 trillion globally by 2050.

Shenzhen-based Roadstar.ai was founded last year by three engineers formerly of Baidu, Google and Tesla. It had closed nearly $130 million in series A funding as of May. Guangzhou-based JingChi Corp. was launched in April 2017 by Baidu’s former autonomous driving chief, Wang Jing. It raised slightly over $50 million in September from investors that included U.S. chip giant Nvidia Corp.