China’s Drive for the Driverless Car 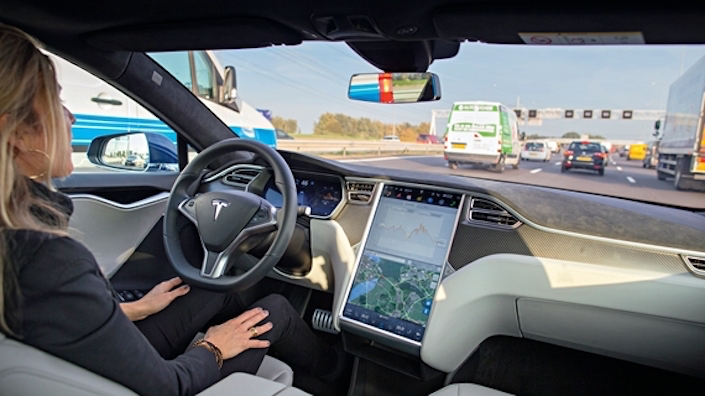 While automobiles have taken on many forms throughout their 100-plus-year history, from the first horseless carriage to the all-electric vehicles of today, one thing has remained the same — the steering wheel.

But as automobiles grow more autonomous, the steering wheel looks more and more likely to go the way of the horse and buggy.

The global autonomous car market is expected to be worth $7 trillion by 2050, according to a recent report by computer chipmaker Intel Corp. and research firm Strategy Analytics.

China isn’t waiting around for its share. While laying out its 2015 “Made in China 2025” manufacturing strategy, the country’s State Council said it hopes to master the key technologies behind autonomous vehicles by 2025. The government wants “partially autonomous” vehicles to make up half of all car sales by 2020, and “highly autonomous” vehicles are to account for 15% by 2025, according to a 2016 joint-planning document by China’s Ministry of Industry and Information Technology (MIIT) and the Society of Automotive Engineers.

Like their foreign competitors, Chinese companies have taken up ambitious goals in developing autonomous vehicles, but they will need to navigate through a number of technological and legal obstacles if they want to get to the head of the pack.

The leap to L3

The auto industry generally designates autonomous driving technology according to the six-level system designed by the engineering standards organization SAE International. Models equipped with today’s driver-assistance systems have a designation of L1 or L2. At L3, cars have technology advanced enough to allow drivers to take their hands off the steering wheel under limited situations. At L4, cars can drive autonomously in most situations. A car with L5 technology is completely autonomous.

It’s not clear-cut where each level begins and ends, said Ye Liang, Shanghai-based automotive principal consultant at consultancy Roland Berger. But the general consensus in the industry is that L3 cars will be able to drive autonomously in three types of situations: heavy traffic, highways and designated autonomous vehicle areas.

To reach L3, carmakers must master three aspects of autonomous-driving technology: perception, prediction and action. Perception is achieved through radar sensors, cameras and other intelligent hardware that allow a car to be aware of its surroundings, such as its location, obstacles and traffic. Prediction comes in when the car’s software can analyze data collected by the sensors to create a precise map that can be used to make guesses about what is about to happen. Action refers to the car’s ability to control mechanical functions such as acceleration, braking and steering.

In July, German automaker Audi announced details of its next generation of A8 sedans set to launch next year. If all goes according to plan, the new A8 will be the first car capable of L3 driving to enter mass production. The model will be able to navigate heavy traffic at speeds less than 60 kph (37 mph). It will also be able to park on its own.

China’s auto and tech companies are also getting into the driverless car game. China’s state-owned automaker FAW Group hopes to leapfrog to L4 by 2021, said Li Qian, a department director at FAW’s research and development center.

The importance of software in driverless cars has inspired many tech companies to dream big in a field traditionally dominated by engineering-focused automakers.

In December 2015, a Baidu-modified BMW participated in a high-profile road test in Beijing, and Baidu announced the creation of an automated driving division led by then-senior Vice President Wang Jin. At the time, Wang’s goal was to achieve commercialization in three years and mass production in five.

As a result, Baidu’s production costs ballooned. “The laser radar alone on Baidu’s driverless car costs around 500,000 yuan,” Wang said in a speech in late 2016.

Unlike internet companies, conventional carmakers have gradually added basic autonomous features, such as blind spot detection, to their models as they drive toward the end goal of full automation.

“The tech companies’ idea is to first introduce the prototype to show off to everyone, then figure out the details of mass production. But the automotive industry has never tolerated accidents or design flaws,” said Xu Weijie, China director of the driverless car division of Intel, which supplies hardware to autonomous-vehicle makers.

Conversely, conventional car companies make their money from sales, so any vehicle they produce must be affordable to the masses.

When it comes to AI, conventional carmakers are beginners. But they do have a wealth of experience in vehicle engineering, and usually have mature supply chains.

The opposite is true for the internet upstarts. Companies like Google Inc. and Baidu have strengths in AI and in high-precision mapping. They have built up huge amounts of road-test data and developed deep learning algorithms over the past few years, which have become valuable assets.

A third group of companies known as “smart” hardware suppliers has also entered the mix by leveraging their unique strengths. These chip and sensor makers provide the necessary parts to bridge the gap between AI software and the cars’ mechanical functions. Nvidia Corp., for example, has found a place for its high-performance graphics processors in autonomous vehicles.

With a growing awareness of their strengths and limitations, these three types of companies have begun to form alliances and differentiate their strategies.

In December 2016, Tencent signed an agreement with Shanghai International Automobile City to work together on autonomous driving and high-definition mapping.

As part of Baidu’s shift away from making cars to offering driverless AI services, the company launched its Apollo open-source software platform for the automated car industry on April 19. In September, Baidu said it planned to set up a 10 billion yuan fund to support the Apollo project.

Baidu has said it wants to turn Apollo, which initially drew 50 corporate partners into the “Android of autonomous cars,” becoming the default system for driverless cars’ cloud needs. In exchange for Baidu’s open source technology, Apollo partners are required to share their own source code and data.

In August, Baidu announced a partnership with state-owned carmaker Anhui Jianghuai Automobile aimed at launching a semi-autonomous car by the second half of 2019.

“Alliances are fashionable because the technology (for automated cars) tends to be new, and supplier solutions are immature,” said Yu Kai, founder of Horizon Robotics Inc., a developer of AI for autonomous vehicles. “The best solution is to find a few partners for deep tie-ups, so that everyone can progress together.”

The first mass-produced L3 cars will encounter a legal void. At L2, human drivers are still responsible for controlling the vehicle. But from L3 onward, control is in the hands of the car. The driver takes over only when the car reaches the limits of its self-driving capabilities. The question of responsibility is a tricky legal problem for legislators in China and elsewhere.

The next Audi A8, for example, gives visual and audio alerts for 10 seconds as its exits autopilot mode, warning drivers that they will soon need to take over.

But if an accident happens during the transition, it’s unclear who should be held responsible — the driver or the car. L3 autonomous driving is “a nightmare for the legal world,” said Chen Chaozhuo, vice president of Zongmu Technology Co. Ltd.

China currently doesn’t have any laws or regulations pertaining to L3 autonomous vehicles on the roads.

In July, Baidu CEO Robin Li rode a driverless vehicle in a road test on Beijing’s Fifth Ring Road, sparking an online debate on the legal status of driverless cars. “The most urgent problem is figuring out how drivers’ licenses should be issued, once machines start driving cars,” said Li Deyi of the Chinese Academy of Engineering.

The MIIT is in the early stages of drafting a policy on the management of “smart” vehicles on public roads, sources close the ministry told Caixin.

In September, sources told Caixin that the MIIT, the Ministry of Public Security and the Ministry of Transport had completed an outline of road-test regulations for autonomous vehicles.

It’s vital that carmakers get to test autonomous vehicles on public roads as soon as possible because test data is key to creating an algorithm powerful enough to match human drivers, said Wang, the former Baidu vice president.

Google estimates that carmakers need data from at least 1 billion miles of road testing before their autonomous vehicles have enough information to perform under most driving conditions. By May, Google had accumulated 3 million miles of data from all of its research dating back to 2009.

In northwestern Shanghai, China’s first dedicated autonomous car testing park opened in June 2016. The facility has received numerous bookings, often months in advance, since it opened in June 2016. Similar projects have been approved in cities like Beijing, Chongqing and Wuhan.

The government also needs to step up and share its data on events like auto accidents, Li Zhenyu said, because it is impossible for any one company to collect all the information it needs within a reasonable amount of time.

“Artificial intelligence can be thought of as a living thing. Although it has flaws at the beginning and may be controversial, it grows through continuous learning. In contrast, once a conventional automobile leaves the factory, it is in a state of constant depreciation,” Huang Mingming, founder of the tech venture capital fund FutureCap, told Caixin.