By Wang Luyao and Clara Spars 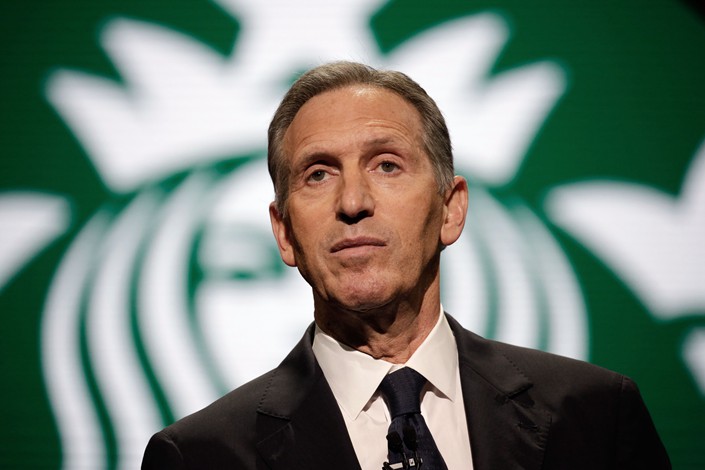 China was still a land of tea drinkers when Starbucks Coffee Co. made the bold decision to dip its toe into the market by opening its first shop in Beijing in January 1999. In the nearly two decades since, the company’s iconic green-and-white logo has popped up in 140 Chinese cities as the nation’s new generation of young urban professionals extended their traditional tastes to include the Starbucks coffee cup.

The company now boasts some 3,300 stores in China, with aggressive plans to nearly double that to 6,000 by the end of 2022. Presiding over the explosive growth was Howard Schultz, who plucked the small coffee shop from the streets of its home in Seattle and cultivated it into the world’s most popular coffee chain.

Schultz was back in China this week following his recent decision to step down as Starbucks executive chairman. He sat down with Caixin to talk about the future of the company in China, as well as his own plans for his new life in retirement.

The following are excerpts from the interview.

Caixin: Why did Starbucks first come to China?

Schultz: I’ve always been fascinated with Chinese culture so I thought it was the right place to start. I’ve been coming here for more than 20 years. It wasn’t always easy, and yet here we are with almost 3,400 stores in 140 cities. Yesterday, we had a meeting with 2,000 Starbucks people in Shanghai and we’ll do the same thing this afternoon.

Starbucks is currently doing very well in China, but has certainly faced its challenges. What’s behind its success?

When we came to China 20 years ago, many people thought we would not succeed here. The truth is we were not an overnight success. It took a number of years, because we had to educate Chinese people about quality coffee. Then, of course, last year, opening up the roastery in Shanghai was a turning point, not only for Starbucks here in China, but around the world. It’s the largest store in the world.

What are your opinions on other coffee shops in China?

The more good coffee in the market and the more Chinese people get exposed to coffee, the better off we will be. Competition makes us better, sharper. I’m very excited because we’re now sourcing and roasting coffee from Yunnan, and Chinese customers have really embraced that. We are now the largest buyer of high–grade coffee in the world from Yunnan province.

What did you learn from your Chinese partners, friends and local entrepreneurs?

When I think about the current tension that exists in the world and the current issues around trade between the U.S. and China, what I would say is that I believe that there are many more similarities than differences around humanity, what we want for our families, what we want for each other. I also strongly believe that the world needs a very strong, trusting relationship between the Chinese and the United States’ people, and I’m hopeful that will occur.

What do you see happening for Starbucks in the next five years? What are the biggest challenges you think Starbucks will face, especially in light of recent global tensions?

We will be celebrating in a year and a half our 50th anniversary. So, as you might imagine, we have navigated through many, many, cyclical changes in society, consumer behavior, government issues. I’m quite confident that over the next five years, 10 years, 20 years, Starbucks Coffee Company is going to continue to build a great, enduring company. My confidence globally and my confidence in China is that China will emerge as the largest market in the world of Starbucks. Not because we will have 10,000 stores, or whatever the number will be, but because we will earn the respect of the Chinese people, our employees, our partners, and do everything we can to be the kind of company that people can point to and say, “They did it the right way. They didn’t come to China and take something, they came to China and they gave back.” That’s why we will continue to be successful.

How would you describe your current status with Starbucks?

I officially left the company last week. What I’ve decided to do is I want to travel around the world — (Starbucks is) in 77 countries — and thank our partners for what they have done. I thought the right place to start would be China.

Do you have any other plans for the next year?

Well, I’m going to have the first summer off in 40 years. So I’ll be with my wife, my kids, my grandkids all summer long, for the first time. Then after that, I’m going to take a step back and examine what I want to do.