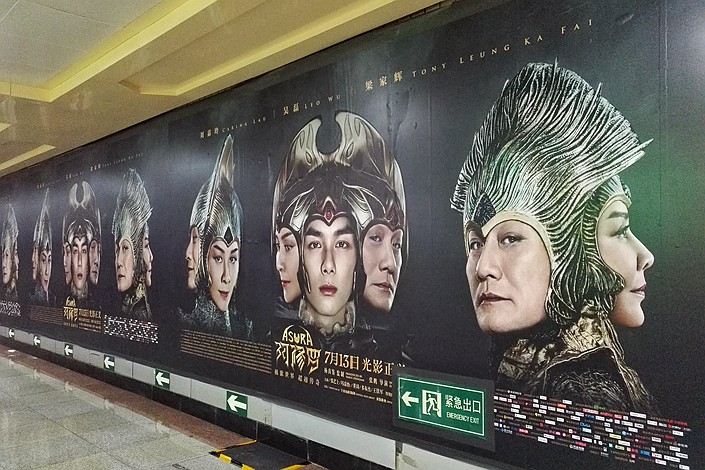 Movie posters for the mega-flop “Asura” paper the wall of a subway station in Beijing on July 4. Photo: IC

A whopping budget of 750 million yuan ($112 million), a dazzling cast including Hong Kong A-listers, and a production crew of 1,800 from three dozen nations. All that failed to enchant Chinese audiences, prompting theaters to abruptly pull “Asura,” a highly hyped fantasy film that was one of China’s most expensive productions of all time, just three days after its opening.

“Based on the decision of all investing parties, ‘Asura’ will stop screening at 10 p.m. on July 15,” said a post on the movie’s official microblog on Sunday. “We sincerely apologize to viewers who weren’t able to watch the movie … and we want to express our deepest gratitude to the crew and cast for their participation over the past six years!” it added.

The mega-flop shines a spotlight on the increasingly large sums being spent on local productions made just for a China box office that has grown rapidly over the last decade to become world’s second-largest, behind only the U.S. Such local productions now account for about half of the market, even as many critics say those films are often inferior to their slicker Hollywood rivals.

Named after the triple-headed demigods of Buddhist mythology, “Asura” had roped in Chinese heartthrob Wu Lei to play a shepherd who turns out to be the reincarnation of one of the warrior king’s three heads. Hong Kong stars Carina Lau and Tony Leung Ka-fai play the other two heads.

At more than 140 minutes, the movie boasts around 2,400 special-effects scenes, and was shot on 30 sound stages with a combined area of more than 80,000 square meters (19.8 acres), according to the official English-language newspaper China Daily.

Despite all that effort, “Asura” took in just 48 million yuan at the box office in its three-day run, accounting for less than 1% of the national total during that time, according to film-rating site Maoyan. The film’s producers quickly pointed fingers at Maoyan, saying in a separate statement the site intentionally recruited people to give it a poor rating of 4.9 out of 10 on the premiere day.

A source close to the production told Caixin the sudden pullout may just be a publicity stunt, in a country where movies sometimes are withdrawn from cinemas only to reappear later with “technical glitches” cited.

“It could be slated for a rescreening later. Otherwise, the investors will have to bear massive losses,” the source said.

The comedy “Pure Hearts: Into Chinese Showbiz” retreated after five days of screening in September before being rescreened in February. The animated film “I Am a Wolf” debuted for one day during the traditionally competitive movie season around the Lunar New Year in 2014 before producers decided to postpone it for re-release in May the same year.

“Asura” may have also been undermined by having to compete with another, more-serious domestic blockbuster, “Dying to Survive.” That film has been a box office leader and won acclaim for its frank portrayal of a generic-drug smuggling case. The film also had to compete with Hollywood productions “Jurassic World: Fallen Kingdom” and “Incredibles 2.” Another hit title, “Skyscraper,” which stars former professional wrestler Dwayne Johnson, is slated for release on Friday.

Coco Feng and Zhao Zuoyan contributed to this report.