By Su Huixian and Li Rongde 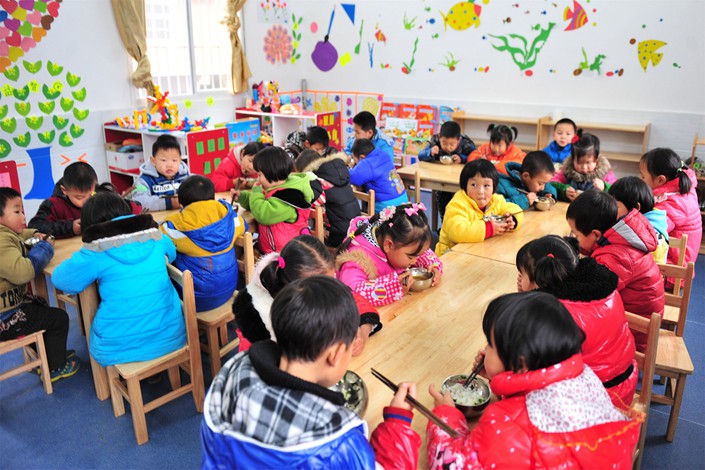 A Chinese non-governmental organization has become the country’s first winner of a prestigious education award for its initiative to provide poor rural areas with preschool services — an accolade it hopes will spur the government to help needy children.

The One Village One Preschool Program, launched in 2009 by the Beijing-based China Development Research Foundation, is among six projects worldwide that were honored in this year’s World Innovation Summit for Education (WISE) Awards — often referred as “the Nobel for educational achievement.”

The six programs, including Nigeria’s Safe Space Club for Girls, were recognized for “their innovative solutions to education challenges and their positive impact,” according to a statement released Tuesday by WISE, a think tank connected to the Qatar Foundation.

The six were among 413 entries for this year’s awards, according to WISE CEO Stavros N. Yiannouka. “The programs can effectively tackle various challenges the world is facing in the field of education,” Yiannouka said.

One Village One Preschool, which in September got off the ground in Ledu county, in Northwest China’s Qinghai province, aims to provide basic preschool services to “the neediest,” according to Lu Mai, secretary-general of the China Development Research Foundation.

The program, which has involved some 2,300 village-level kindergartens in 21 impoverished counties in nine central and western regions, has benefited 170,000 underprivileged rural children, statistics from the foundation show. Preschools in China are called kindergartens.

Among more than 51,000 rural children in nearly 1,800 kindergartens covered by the program,  two-fifths have been left behind by parents that have migrated to a city for work and more than 11% are from single-parent family, according to the foundation.

Less than a third of the approximately 590,000 villages in China have a kindergarten, according to the 2017 National Census of Agriculture.

Providing basic kindergarten services does not cost much, but could be a life-changing experience for many children, Lu said.

Lu said he has never forgotten how intimidated the youngest child of a family of six was when he visited them few years ago in the city of Bijie, in Southwest China’s Guizhou province. “He was so afraid of meeting strangers that he hid under the bed,” Lu recalled. “Now, he attends a kindergarten we launched in their village and is as cheerful as any other child of his age.”

The preschools under the program usually operate in renovated rural homes and cost only 30,000 yuan ($4,480) a year, half of which is spent on the training and compensation for volunteer teachers. But Lu said that they are facing stiff competition for experienced teachers from publicly funded kindergartens and preschools.

Xie Lin has been a full-time teacher at a kindergarten in her home village in the central province of Hunan, covered under the One Village One Preschool initiative since 2012.

Xie, 30, said that she chose to teach at the facility because she never went to a kindergarten when she was little. But six years later, she is looking for a way out because she gets paid only around 1,000 yuan a month, less than half of what teachers at public schools are paid.

“I enjoy teaching at the school and felt fulfilled over the improvements we’ve made and I’m not asking for the same amount of pay,” she said. “But I need money to lead a decent life.”

Lu said that they hope the government will take a cue from what they have accomplished to pitch in with public funding like the authority has done for other anti-poverty programs like the Free Lunch Program.

The Free Lunch Program, launched by hundreds of veteran journalists and news organizations in 2011, raised tens of millions of yuan to fund new kitchens in rural schools.

The program, which helped shine a light on the plight of rural school students, has prompted the central government to dole out 16 billion yuan each year since late 2011 to fund lunch programs for 23 million students in 100,000 rural schools.