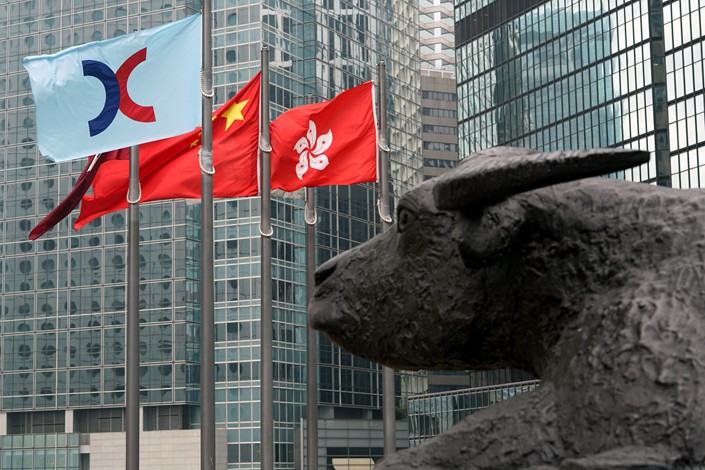 The headquarters of Hong Kong Exchanges and Clearing Ltd. is seen in Hong Kong on April 30. Photo: VCG

Chinese investors may get their chance to buy shares in smartphone maker Xiaomi Corp. after all, following talks between the two mainland bourses and the Hong Kong Stock Exchange on Wednesday.

Under a deal agreed by the three parties and announced by Hong Kong Exchanges and Clearing Ltd. (HKEx), which operates the city’s stock exchange, a plan will be put together that will allow mainland investors trading Hong Kong-listed shares via the Stock Connect program to eventually access companies with weighted voting rights (WVRs), also known as dual-class shares.

“The meeting acknowledged that as mainland investors are not yet familiar with weighted voting rights (WVR) companies, there is a need to consider the maturity and regulatory practices of the two markets when including WVR companies in the list of eligible securities for Southbound trading under Stock Connect,” HKEx said in its statement.

“An initial Special Stability Trading Period (SSTP) will be required for Hong Kong-listed WVR companies, following which the WVR shares will be included in Southbound trading under Stock Connect if such shares are otherwise eligible for inclusion under the current Stock Connect rules.”

It said the three exchanges have agreed to set up a joint working group to formulate the specific programs and supplementary rules for the inclusion of WVR companies in Stock Connect trading “as soon as possible.”

The Shanghai and Shenzhen stock-exchange regulators stunned investors over the weekend when they issued a joint statement (link in Chinese) that certain types of shares, including those with WVR, will be temporarily excluded from the Stock Connect programs, the main channel for mainland investors to trade Hong Kong-listed equities.

WVR are a stockholding structure under which the voting power attached to a special share is greater than that attached to an ordinary share. They are favored by founders of tech and family-owned companies as a way of retaining control of their firm after a public listing.

The exchanges said the decision was made because many mainland investors lacked a proper understanding of products such as WVR and of the risks involved. Some investors said they preferred to familiarize themselves with WVR firms on the mainland market first, they added.

The announcement came just days after Xiaomi, which had ditched plans to issue Chinese depositary receipts (CDRs) in Shanghai, listed its shares in Hong Kong in an initial public offering (IPO) that raised $4.7 billion. The Beijing-based smartphone manufacturer was the first company to take advantage of new rules that allowed companies with a WVR structure to list on the Hong Kong exchange.

The bourses’ move effectively banned mainland investors from buying Xiaomi’s shares, and drew immediate criticism from Charles Li, HKEx’s CEO, who called the decision a selfish calculation. Li, who was already scheduled to meet with Beijing regulators on Tuesday, said he would raise the issue during the talks.

The Hong Kong and Chinese stock exchanges are engaged in deepening competition to attract mainland companies amid an expected flood of IPOs over the next few years, especially by startups, and internet and technology businesses.

HKEx in April revised its regulations to allow WVR companies to list on the city’s exchange after years of debate and the loss of Chinese technology giant Alibaba Group Holding Ltd.’s $25 billion IPO to the U.S. in 2014. Access to mainland capital through the Stock Connect program is a selling point to attract new listings.

Mainland regulators also want to lure high-tech Chinese companies, who have traditionally chosen to list in the U.S. or Hong Kong. This year, they launched a pilot program for CDRs in a bid to encourage domestic firms listed overseas to trade at home.

Xiaomi was scheduled to sell CDRs at the same time as its Hong Kong IPO but pulled the plan because of pricing issues and said it would sell shares in China at a later unspecified date.