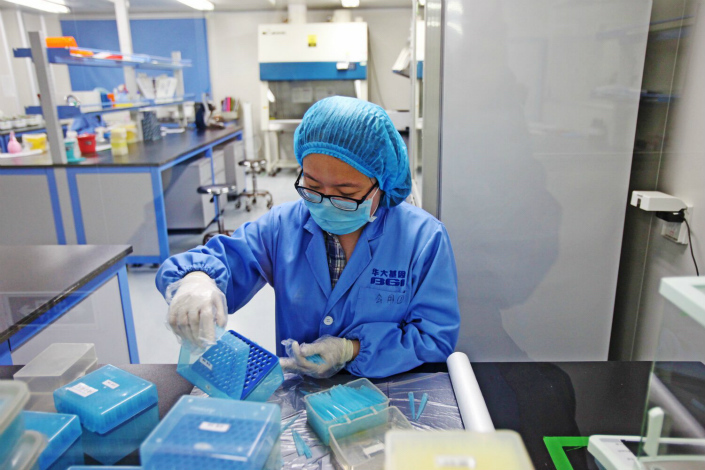 Chinese genome giant BGI Group is moving to raise $1 billion for its gene-sequencing equipment unit in preparation for a separate listing in Hong Kong, sources familiar with the matter told Caixin.

One private equity manager told Caixin that MGI Tech is planning a Hong Kong listing in 2019.

BGI, formerly known as Beijing Genomics Institute, is China’s largest genomics company. It is 85.3% owned by president and founder Wang Jian, who was a senior research fellow at the University of Washington before he returned to China to create BGI in the 1990s.

BGI owns 42.4% of its main business unit BGI Genomics Co., one of the world’s largest gene-sequencing companies, which debuted on the Shenzhen bourse’s Nasdaq-style ChiNext board last July in a 484 million yuan initial public offering.

BGI’s businesses have long been a highly competitive target for institutional investors, said one of BGI’s early investors. BGI Genomics declined to comment.

According to BGI’s financial report, MGI Tech was valued at 30 billion yuan in 2017. BGI didn’t disclose any revenue or profit data for MGI Tech but said it has installed more than 100 gene-sequencing units in several countries.

Established in 1999, BGI began as a government-funded laboratory and started to commercialize its findings in 2012. Since then the genome giant has been a hotbed for institutional investment, with financing from China Life Insurance Co. Ltd., Citic’s Goldstone Investment, billionaire Jack Ma’s Yunfeng Capital, and SoftBank China Capital.

Shenzhen-listed BGI Genomics’ market value surged to more than 100 billion yuan in November but has dropped to the current 30 billion yuan. The company’s shares tumbled in recent weeks amid brewing public questions over the effectiveness of its tests. A domestic news site reported that an infant in central Hunan province was born with several birth defects despite prenatal tests by BGI Genomics indicating little risk of genetic abnormality.

BGI Genomics told Caixin Monday that its missed diagnosis rate is about 0.0028% of the 3.13 million prenatal tests it has made. The company didn’t elaborate on what could cause such a diagnostic failure.